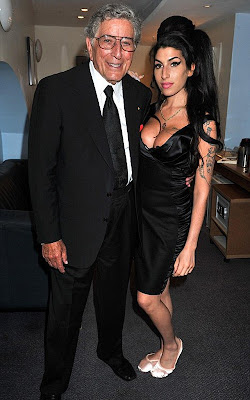 Amy Winehouse would have turned 28 today, had she not died under still-not-totally-explained circumstances in London, in July. A video of her last recording, a duet with Tony Bennett on "Body and Soul," was released today, and it's a nice, solid version: certainly not embarrassing, but far from a revelation. I'm not crazy about her slurred, overly mannered phrasing, preferring her occasional light, playful touches, as in the flirtatious way she delivers the line "I'm yours for just the taking." Bennett does his usual classy job, though, and overall, I think the duet can be considered a success. Proceeds from sales of the track will be donated to the Amy Winehouse Foundation.

It's impossible to watch the clip and not wonder about Winehouse's state of mind. Sometimes, she seems a bit bored, or lost in her thoughts, but generally she seems engaged. A couple of times, she looks skyward -- I'm not sure what that's about. The final hug with Bennett is a nice touch.

She seems a bit jittery at times, especially when compared to the calm and collected Bennett, but on the other hand, it's not like her behavior is extremely odd or anything (unlike the YouTube clips of her last several stage performances). If you were watching this session when it occurred, you might have had hopes that she had put her demons behind her and was on the way to straightening her life out. And maybe she really was making some progress -- we'll never really know.

"Body and Soul," written by Edward Heyman, Robert Sour and Frank Eyton (lyrics) and Johnny Green (music), has been a pop-jazz standard since the 1930s. Among the most famous versions is one by one of Winehouse's main vocal influences, Billie Holiday. Check it out: http://www.youtube.com/watch?v=VHcppf61OoM 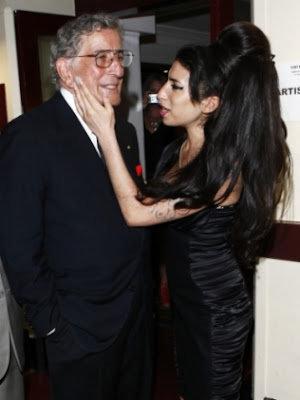 Posted by Arnaldo DeSouteiro at 8:01 AM