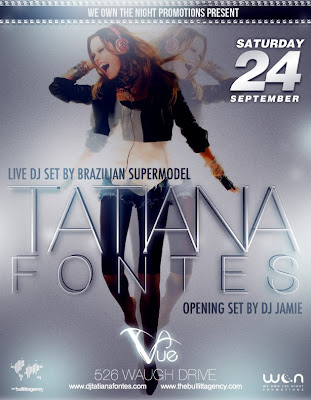 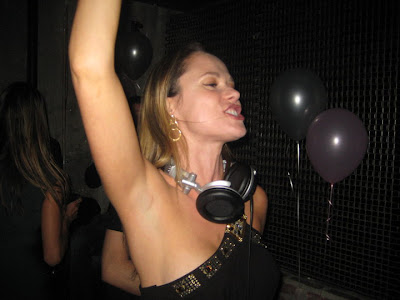 Saturdays are about 2 things, the MUSIC and DANCING! Since the layout and club screams energy, the guys @ We Own The Night decided to put on a weekly showcase of Texas elite DJ's from Houston, Austin, Dallas and all around! Once a month they plan to bring you out of town DJ's w/ Residencies in Vegas, Miami, LA and Chicago.

Today most 12 year-old girls would tell you their favorite band is Hannah Montana, but if you asked Tatiana Fontes at that same age, she would've said Duran Duran. However this is not surprising considering she's been a part of the music scene her entire life.

Born and raised in Florianopolis, Brazil, where her father was a nightclub owner and her brothers were professional DJs, it's no wonder she took up a serious passion for music so early on in life. 'I've been into it as long as I can remember, after school I would be in the DJ booth helping my brothers, learning the ropes.' At the age of five she was taking music and ballet lessons, writing, directing, and starring in her own theater productions for friends and family. She even performed in a popular singing/dancing group called Paquitas de Floripa, which traveled the state performing at local events and venues.

Although Tatiana had an obvious affinity for music early on, her career took a different direction at the age of 15 when she began receiving offers for modeling gigs in her hometown. A year later she was invited to participate in a contest sponsored by Elite Models known as Look of the Year. Even though modeling wasn’t her biggest passion, she liked the opportunities it offered – experiencing life beyond Florianopolis. This contest gave her just that, when it scored her a modeling contract in Japan.

Tatiana went on to be an international model doing major campaigns, commercials, editorials, fashion shows, and billboards in Paris, Milan, Switzerland, Germany, Brazil, and more. In 1999, she was cast as a model in the Oliver Stone film "Any Given Sunday." In 2001, acting brought her to the Los Angeles, where she would go on to study the craft with top veterans of the biz. The hard work paid off and Tatiana went on to book dozens of commercials, such as the 2005 Pepsi campaign she did with Eva Longoria. She scored a dramatic role in the Columbia Pictures feature film, "Sharkskin 6," and a part in the hit show "Las Vegas," among others

With success in her new home of Los Angeles, one would think her life was complete. But Tatiana was itching to fill a major void in her life… and that was music. It was always her true passion and she knew she had to return to it. Fortunately, it didn’t take long for people to take notice of her talent, landing her DJ gigs at the hottest clubs and parties around the world. Her style is a fusion of the 80’s and rock she grew up with, along with the house and electronic music from her days in Europe working as a model." Join us as We Own the Night presents Tatiana Fontes alongside resident DJ Jamie at VUE Nightclub in Houston, TX. 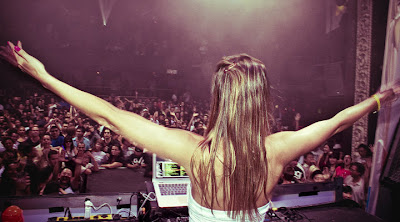 Posted by Arnaldo DeSouteiro at 5:38 AM