Jon Hendricks: The Father Of Vocalese At 90 - NPR

Jon Hendricks: The Father Of Vocalese At 90
by Lara Pellegrinelli
September 16, 2011 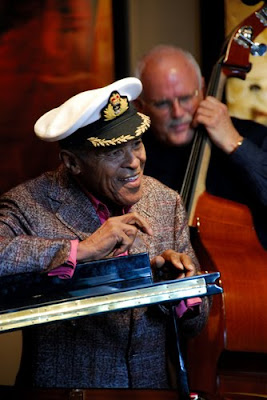 (Hendricks gives a clinic on vocalese at the 2007 Art of Jazz Festival.)

Jon Hendricks turned 90 on Friday. The singer and lyricist is best known for his work with Lambert, Hendricks and Ross in the 1950s, putting words to jazz — including insanely complex vocal arrangements of instrumental solos.

One of Hendricks' favorite anecdotes involves a party where the wives of composer Jerome Kern and lyricist Oscar Hammerstein II had a little dispute over who wrote "Old Man River."

"Beg your pardon. Your husband wrote, 'Da da da da.' My husband wrote 'Old Man River,' " Hendricks recalls, laughing. "And that's a good illustration of how the lyric brings the song out like a flower blossoms. It's the lyric that makes the song."

The Word That Describes The Sound

Jon Hendricks writes his own songs — words and music — and is also a critically acclaimed jazz singer. But he's best known for fashioning lyrics to the big-band arrangements of Count Basie, Duke Ellington and Woody Herman — not just the melodies, but all of the parts, down to the most technically demanding solos.

"You find a word that exactly describes that sound. And then you've got it," Hendricks says. "Words are very flexible things."

Hendricks' lyrical dexterity found the perfect outlet in Lambert, Hendricks and Ross, the pioneering vocal trio he co-founded with singers Dave Lambert and Annie Ross in the 1950s. A new generation was getting hip to swing music, and the group inspired legions of young fans.

Al Jarreau was a teenager when he first heard the trio on The Steve Allen Show. "I have this image in my head of me in the house I grew up in, and hearing this incredible music on the television show, going over to it, and there's Jon Hendricks, Dave Lambert and Annie Ross," Jarreau says. "It knocked me out of my socks, and I'm still in flight."

Hendricks performed as a child with piano virtuoso Art Tatum. He served in WWII, and afterward studied law on the GI Bill. But it was a chance to sit in with legend Charlie Parker — nicknamed "Bird" — that pointed to his real future.

"It seemed like I must have scatted about 34 choruses," Hendricks says. "I kept thinking I should quit, but just one more. I can do better than that. One more, one more. So we had this bandstand confab. Bird says, 'What you doing, man?' I said, 'I'm studying law.' He says, 'You ain't no lawyer.'"

Hendricks moved to New York, ghostwrote lyrics for a Tin Pan Alley publisher and met Dave Lambert. The two convinced a producer (Creed Taylor) to make a record of Count Basie's charts arranged for a full vocal ensemble. But they had a problem: The singers couldn't swing. So Lambert, Hendricks and Ross went into the studio after hours.

"So Dave says we'll come in at 8," Hendricks says. "And we'll do a process called multitracking."

The 12 voices heard on Lambert, Hendricks and Ross' debut, "Sing a Song of Basie," belong to the trio's three singers.

In spite of its success, Lambert, Hendricks and Ross lasted only a few years. Dave Lambert was killed in a roadside accident. Hendricks kept performing. Jarreau finally got the chance to record with his idol when Hendricks came up with an arrangement of the Miles Davis and John Coltrane classic "Freddie Freeloader."

"In that solo of Trane's, which is something like [sings]," Hendricks says, "it's that complex and precise in the notes that have to be sung. And then, to have the idea that you can write a lyric for that and say, 'Speaking of Freddie. Who is Freddie to me?' And all these stories about the kind of drink that he sells and kind of bar he tends. That's insane."

These days, Hendricks in a little more low-key in his performances. It took him a few minutes to make his way to the stage during a summer show with Annie Ross at New York's Blue Note, the first to celebrate his 90th birthday. Nevertheless, one thing's for sure: Hendricks is never at a loss for words. 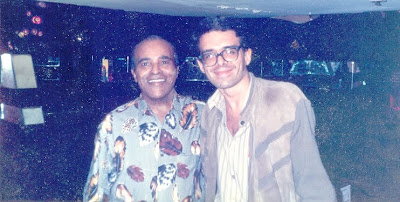