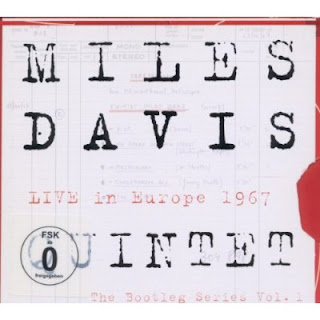 Remastered and ready for release since 2007, when Seth Rothstein was still working on several similar projects for Sony's Legacy label, this phenomenal set finally sees the light of the day. In the 1960s Miles Davis toured Europe several times with some of the greatest bands he ever led. As the first title in a projected series of boxed sets Sony/Legacy introduces "Live In Europe 1967 - The Bootleg Series Vol.1" featuring Miles Davis second great quintet, arguably the single greatest small group ensemble in jazz history ever.

The recordings from their 1967 European tour are some of the only existing documentation of the band performing compositions from the extraordinary series of studio albums they made between 1965-1967 -- "E.S.P.," "Miles Smiles," "Sorcerer" and "Nefertiti." Now fans can hear live versions of "Agitation" (from "E.S.P."), "Footprints" and "Gingerbread Boy" (from "Miles Smiles"), "Masquelero" (from "Sorcerer" ) and "Riot" (from Nefertiti); plus, Miles revisits some of the earlier classics he had been performing for years -- "'Round Midnight," "On Green Dolphin Street," "I Fall In Love Too Easily" and "No Blues" -- all in strikingly different interpretations from the original studio versions. Seeing this band in action only further emphasizes their near supernatural rapport!

This essential item is available on DustyGroove and that's what they say:
http://www.dustygroove.com/item.php?id=xthyv85rqc

Amazing live documents of Miles Davis and his incredible mid-to-late 60s quintet – Wayne Shorter on tenor, Herbie Hancock on piano, Ron Carter on bass, and Tony Williams on drums – complete concert recordings from Antwerp, Copenhagen and Paris on 3CDs seeing release for the first time ever, plus a DVD featuring the only known video footage of this group from the period! CD 1 features material from 10/28/68 in Antwerp, CD 2 on 11/2/67 in Copenhagen and 11/6/67 in Paris, with the latter concert continued on CD 3. This is landmark stuff here – a surprisingly rare opportunity to hear first rate live recordings of legendary material from the ESP, Miles Smiles, Sorcerer and Nefertiti albums – as well as brilliant revisits of vital earlier material. Includes live takes on "Agitation", "Foot Prints", "No Blues", "Gingerbread Boy", "On Green Dolphin Street", "The Theme", "Footprints", "Masqualero", "I Fall In Love Too Easily", "Walkin'" and more. The DVD starts with five numbers recorded on 11/7/67 in Karlzruhe, Germany: "Agitation", "Footprints", "I Fall In Love Too Easily", "Gingerbread Boy" and "The Theme". It concludes with material in Stockholm on 10/31/67: "Agitation", "Footprints", "'Round Midnight", "Gingerbread Boy" and "The Theme". © 2011, Dusty Groove America, Inc. 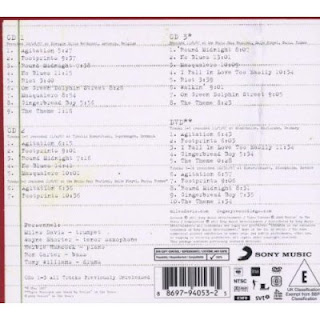 Posted by Arnaldo DeSouteiro at 7:09 AM