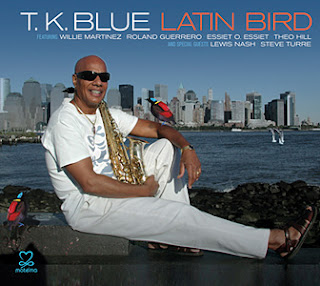 T.K. Blue's new CD "Latin Bird," his first for Motéma Music and ninth as a leader, takes the alto saxophonist back to his musical and personal beginnings. Charlie "Bird" Parker was a major early inspiration for T.K., and eight of Parker's classic compositions are ingeniously reworked in Afro-Cuban, Caribbean, Brazilian, and New Orleans second-line rhythms. On alto sax, the leader showcases the big influences of Phil Woods and mainly Paquito D'Rivera, specially on track 2, "Si Si," in a powerful solo propelled by the infectious groove that the strong rhythm section provides. The sax-trombone combination works pretty well, with Roland Guerrero adding a hot spice on the congas.

The New York-born son of parents from Jamaica and Trinidad, and a mainstay of jazz master Randy Weston's band since 1980, Blue is profoundly fluent in the various musical styles of Africa and the African Diaspora. "Barbados" (the best version since Phil Woods' take on the all-star session "Rhythmstick" for CTI in 1989) is given a calypso arrangement and "Donna Lee" is played as a samba -- with Guerrero using multiple Brazilian percussion instruments such as pandeiro, agogo and even cuica -- while "Chi Chi," "Si Si," and the frenetic closener "Buzzy" utilize a two-three clave.

Also in the program is a beautiful reading of "'Round Midnight," the saxophonist's all-time favorite ballad, as well as "He Flew Away Too Soon," an a capella alto saxophone improvisation dedicated to trombonist Benny Powell. Blue's longtime friend and Weston band mate, Powell had been scheduled to play on "Latin Bird" but died a few days before the session, being replaced by Steve Turre.

Blue's band for the occasion consists of pianist Theo Hill ("I'm intrigued by his sound, maturity, and creativity"), esteemed colleague Essiet Essiet on bass, Willie Martinez on drums and timbales (also part of T.K.'s previous album), and percussionist Roland Guerrero -- the same quintet (with James Weidman filling in for Hill) who performed in December 2010 at the World Festival of Black Arts and Culture in Senegal, where Blue also performed with Weston. Special guests on "Latin Bird" include the invaluable drummer Lewis Nash, heard on two selections, and trombonist and shell-blower Steve Turre, who contributed to three others.

Born in the Bronx and raised on Long Island, T.K. Blue began gigging around New York City in the mid-1970s with the Natives, a group led by South African pianist Ndikho Xaba. Through Xaba, he met Abdullah Ibrahim (then known as Dollar Brand) and joined his group in 1977. He spent three years touring the world with Ibrahim, with whom he recorded three albums.

Since 1980, Blue has been a member of Randy Weston's band and currently serves as its musical director. "I'm indebted to him tremendously," Blue says of the pianist. "He showed me a lot of things about life and how to be a man and also how to seek my heritage and find out about Africa."

Blue spent much of the 1980s living in Paris and continued performing with Weston, who was also a resident of France. "There were a lot of African people there, which was attractive to me because I wanted to learn about my roots," he says. "My dad and my grandfather were from Jamaica, but they used to talk to me a lot about Africa."

The saxophonist, who played in Paris with musicians from throughout Africa, as well as from Brazil, Martinique, and Guadeloupe, made his first album there in 1986. Titled "Egyptian Oasis," the disc came to the attention of the United States Information Agency in France and led to three State Department-sponsored tours of Africa for Blue and his band.

Since returning home to New York in 1990, Blue has continued performing and recording with his own groups and with Weston and worked with a wide range of jazz and world artists from Bobby McFerrin and Pharoah Sanders to Ghanaian drummer Yacub Addy's Odadaa. A graduate of New York University who later earned a Master's in Music Education from Teachers College at Columbia University, Blue has for the last three years been Director of Jazz Studies at Long Island University's C.W. Post Campus.
Posted by Arnaldo DeSouteiro at 7:43 AM