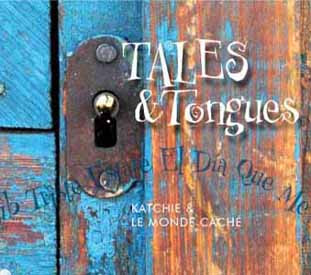 Vocalist/flutist Katchie Cartwright and her group Le Monde Caché are proud to announce the release of "Tales & Tongues" — a collection of songs spanning cultures and epochs, performed by a fiery jazz quintet and imbued with a vibrant improvisational aesthetic.

The great Jimmy Heath has hailed Cartwright as “a soulful intellectual with a velvet sound and uncommon ability.” JazzTimes has described her as “one helluva singer.” Holding a Ph.D. in ethnomusicology, she melds her insights as a scholar, educator and performer into an original, forward-thinking musical vision she terms the “global songbook.”

Through it all she projects a surefooted individuality — a remarkable feat in a set of music this diverse and far-reaching. As music journalist David R. Adler writes in the liner notes: “Ultimately, "Tales & Tongues" is about musical openness, about jazz’s particular way of drawing in the world and still remaining unmistakably itself.”

Cartwright’s partners on "Tales & Tongues" are saxophonist Richard Oppenheim — her husband and musical collaborator of long standing — along with pianist Mark Lomanno, bassist Billy Satterwhite and drummer Kevin Hess. Together the group lends supple rhythm, luxuriant harmony and springy interplay to a set rich in melody and poetic vocal expression.

A longtime New Yorker, Cartwright relocated in 2006 to San Antonio, Texas, where she has a tenured appointment at Northwest Vista College. She has received Fulbright awards for residencies in Greece and Lebanon, and has performed and conducted workshops in South Asia, West Africa, South America, the Caribbean and Europe.

“When I got to San Antonio,” she states, “I started a radio show, ‘Planet Jazz,’ on the Trinity University station, and a lot of that was the global songbook — playing music that has gone into the jazz ‘stream,’ things that have gone back and forth from African diaspora cultures and can be considered a part of jazz, in one way or another.”

This process of listening and sharing fed into the project that became "Tales & Tongues." Cartwright’s previous efforts with Richard Oppenheim include "A Mumbai of the Mind: Ferlinghetti Improvisations" and "La Faute de la Musique: Songs of John Cage," hailed by David Dupont of One Final Note as “a pair of estimable releases … each session has a distinct flavor, yet the more I listened to them, the more they merged into one beautiful expression....”

Earlier releases are "Soulmates" by the Cartwright/Oppenheim Quintet (“Intriguing and unpredictable” – Scott Yanow), and "Live! At the Deer Head Inn" by the Katchie Cartwright Quintet (“Highly recommended” – Phil Woods). These CDs feature Oppenheim with James Weidman on piano, (producer) Bill Goodwin on drums, and Cameron Brown or Belden Bullock on bass.

With every outing, Cartwright solidifies her reputation as “an uncommonly disciplined, unaffected artist” (Joel Siegel, Washington City Paper). "Tales & Tongues" is another new departure and a sign of more great music to come.
********
Liner notes by David R. Adler:

Standing apart, making music of distinction and lasting value, isn’t easy in any field. But as my colleague Francis Davis argued in a 2006 essay for The Atlantic: “We expect more from singers...because words speak to us in a way no trumpet or saxophone can — and because their instrument is also ours.” For Katchie Cartwright, standing apart isn’t a problem. A longtime New Yorker with a Ph.D. in ethnomusicology, she relocated to San Antonio, Texas in 2006 and has a tenured appointment at Northwest Vista College. Her previous efforts include treatments of works by John Cage and poet Lawrence Ferlinghetti. Now, with Tales and Tongues, she shifts her attention to what she terms the “global songbook.”

If we’re convinced by Davis’s take on the immediacy of words, just think of the possibilities and poetic richness of a collection sung in Ladino, Yiddish, Spanish, Portuguese, Italian and French. Leading her group Le Monde Caché (“the hidden world”), Cartwright brings out the ardor and melodic refinement in this material, singing with great poise and also playing flute, her first instrument, which to her constitutes a language in itself. “My specialization is cross-cultural theories and
practices of improvisation,” Cartwright explains, drawing a line from her academic to her artistic work. “When I got to San Antonio I also started a radio show, ‘Planet Jazz,’ on the Trinity University station, and a lot of that was the global songbook — playing music that has gone into the jazz ‘stream,’ things that have gone back and forth from African diaspora cultures and can be considered a part of jazz, in one way or another.”

From all these various corners came the songs of Tales and Tongues. Cartwright enlisted a group of musicians who would do them justice, beginning with her husband and frequent collaborator, alto saxophonist Richard Oppenheim. “A friend calls him the flamethrower,” says Cartwright. “He’s a great musician, with a lot of depth and breadth and great ears. We talk a lot about what it is that we’re going for: the sound, the timbres, the arrangements and so on.”

Cartwright met pianist and fellow ethnomusicologist Mark Lomanno “while we were founding the Southern Plains chapter of the Society for Ethnomusicology. I was really fortunate to have him to work with.” Of Billy Satterwhite, the bassist, Cartwright says: “He’s one of the younger generation, working on a Masters in Ann Arbor, Michigan with some colleagues of mine. ‘Billy the Kid’ we call him, very eager and wonderful.” Drummer Kevin Hess, she adds, “is from a piano-tuning and musician dynasty here in San Antonio.” Together, they all “get” Cartwright’s intention on Tales and Tongues, coming to grips with music from vastly different
traditions and vocabularies and giving it life in a new context.

While readying these songs for performance, Cartwright wrestles with subtleties of pronunciation and phrasing, of meaning and syntax. In the end she connects not just to the poignant texts, but also to the doleful minor-key melodies that make up this set. That subtle Old World tonality, Cartwright notes, can be found in certain corners of American pop — she cites Irving Berlin’s “Blue Skies” or Cole Porter’s “My Heart Belongs to Daddy” as examples. From the Benny Goodman-associated
classic “Bay Mir Bistu Sheyn” (sung in the original Yiddish) to Victor Young’s “Delilah” (a flute feature that closes out the album), Cartwright hits on that undefined yet universal feeling that goes by different names, from blues to saudade. She quotes the old club joke: “D minor — to you it’s a key, to me it’s living.” The themes can be outright sad: young women scorned, for instance, in the Ladino “Alta Va La Luna” (“high goes the moon”) and the Yiddish tango “Ikh Hob Dikh Tsufil Lib” (“I have too much love for you”). Yet redemptive hope can always peek through the clouds.

“The two parts of ‘Ikh Hob’ are really different,” Cartwright observes. “The verse tells the story of being left at the altar, and then in the tango part, she’s happy despite it all in her dreams, saying, ‘I can’t hate you, the love I have for you gives me pleasure rather than pain.’ I think that’s great.” Yes, there are Jewish tangos, and hand it to Cartwright for digging them up. She also highlights the tango tradition with “El Día Que Me Quieras” by Carlos Gardel, the Argentine legend lost in a plane crash in 1935. “For my doctorate I did research on how the new tango came
out of the old, so I’ve been interested in Gardel for 10 or 15 years,” Cartwright says. “This is a standard that jazz musicians in Argentina would do. It’s a tremendously romantic song — a curious little glowworm nests in her lover’s hair…. Here in San Antonio we’re a majority Latino city, so the audience loves it.”

Of course, no South American jazz journey would be complete without Brazil. Cartwright includes the Jobim staples “Triste” and “Chega de Saudade” and pointedly steers clear of the English lyrics that are often used. “The lyrics by Jobim and Vinicius de Moraes capture something much more,” she argues. “That’s a beef I have — in English they’re fourth- rate lyrics, but they’re first-rate in Portuguese. So why not sing them that way?” Another famous bossa, “Estate,” comes to us from Italy: “Think Nino Rota,” Cartwright says of the general vibe. “Italian bossas are more surreal, they’re once more removed.” French is Cartwright’s strongest language besides English — she lived in Lebanon for a year as a teen — and so “Sous Le Ciel de Paris” and “Que Reste-t-il De Nos Amours” have a natural, homey quality. “Kevin and Rich tore it up,” Cartwright enthuses, referring to the sax-drum breakdown (her idea) on the former. Who knows if this bright waltz was on Kenny Dorham’s mind when he wrote “Blue Bossa,” but the passing melodic resemblance is there. Like the Brazilian tunes, the Charles Trenet number, better known to Americans as “I Wish You Love,” has a far greater impact in its original language. “In French,” Cartwright notes, “it’s about what happened to our youth, what happened to those stolen kisses and trysts in little villages, and your hair blowing in the wind, what happened? It’s all part of our past now. That’s totally different than ‘I Wish You Love,’ which is sappy by comparison.”

Ultimately, Tales and Tongues is about musical openness, about jazz’s particular way of drawing in the world and still remaining unmistakably itself. Jazz history is rife with artists who’ve embodied that ideal in their work, and this musician/scholar, from her haven down in Texas, is doing that history proud. As the saying (sort of) goes, you can take Cartwright out of New York, but you can’t take New York and its restless global mindset out of Cartwright.