This Time, It's Barbara Morrison's Turn for a Favor 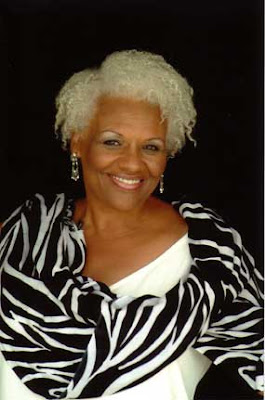 This Time, It's Barbara Morrison's Turn for a Favor
by Kirk Silsbee
Los Angeles Times, September 10, 2011

Sitting in the hall that she operates in Leimert Park on a recent afternoon, Barbara Morrison is uncharacteristically sedentary. She recently lost a leg to diabetes. While she speaks with customary grace and cheer, the jazz vocalist is in a period of adjustment.

"The doctor said they needed to remove my leg to save my life," she relates matter-of-factly. "Thankfully, it doesn't affect my singing at all." Morrison, who turns 62 on Saturday, is soon to be fitted for a prosthetic leg.

Within the Los Angeles jazz community, Morrison is known as one of the busiest singers. Rare is the benefit where she doesn't lend her voice for musicians in need. Now it's Morrison's turn to receive aid. On Sunday, a star-studded bill that includes the Frank Capp Juggernaut, Ernie Andrews, Corky Hale, Tierney Sutton and Junior Mance assembles at Local 47 to raise funds for her medical bills.

On this afternoon, Morrison talks about her journey as an artist and her challenges ahead.

Sunlight beams through openings in the drapes of the Barbara Morrison Performing Arts Center, a 99-seat house with a sizable stage. It's quiet at midday, and she's comfortable. She opened the facility in January, with a ribbon-cutting ceremony presided over by Councilman Bernard Parks. The Leimert Park center provides instruction and a showcase for developing performers in music, dance and theater. The opening offering, "Me and Mr. B.," a tribute to singer Billy Eckstine, garnered attention. But with few follow-up productions, the facility has faced mounting bills and struggled financially.

"This place is the result of a dream," she offers. "It's a chance for me to provide a showcase to all kinds of performers."

The dream didn't come without pain. Pianist Hale knew Morrison many years before they worked together last March. "I heard that the center needed some help," Hale recently related. "So I got together with Barbara and we put together a Billie Holiday tribute."

What impressed her about Morrison? "We didn't rehearse, but she was an absolute delight to work with. There was a line out the door and onto Degnan Avenue, so she made some money that night."

Morrison grew up in the Detroit suburbs; jazz singing was not predestined for her. Her father was a doo-wop singer and she vocalized through her young years. The Motown sound exploded all around her and Morrison, the same age as Stevie Wonder, had no style that she favored.

When she moved to Los Angeles in 1973 at 21, steady work with blues legend Eddie 'Cleanhead' Vinson and on "The Johnny Otis Show" grounded Morrison in blues and jazz. She recounts: "Eddie used to tell me, 'Get your own sound, girl!' Johnny said, 'Why are you singin' like Barbra Streisand? You need to learn your own people's music!'"

Equally comfortable in jazz and blues, Morrison has appeared on 20 albums -- her own and as a guest vocalist. She has performed at the Montreux, Monterey, Long Beach and North Sea jazz festivals, Carnegie Hall and probably every Southern California jazz venue of the last 40 years. Morrison has been heard with Ray Charles, Dizzy Gillespie, Kenny Burrell, Jimmy Smith, Dr. John, the Count Basie Orchestra and Doc Severinsen's Big Band, to name a few.

She has long been admired for encouraging emerging artists. "Barbara is kind of the lifeblood of L.A. vocal jazz," singer Sutton says. "I came here in '93, and she was like a big sister to me: incredibly generous and full of wonderful humor. She's the first person to give you a warm embrace for what you're doing."

Sutton also appreciates Morrison's vocal gifts: "She has perfect diction, beautiful pitch and tone, and she sings her butt off. Barbara's one of the great ones."

A fondly recalled concert performance illustrated Morrison's interpretive gifts. One night in 2001, Morrison gave what amounted to a tutorial at Cal State L.A.'s Luckman Auditorium. The late saxophonist Teddy Edwards convened his extended Brasstring Ensemble, complete with his original songs. Ernie Andrews handled the male voice; Morrison took the woman's role on a couple of duets. Not only were those numbers sung well, the attendant gestures and pantomimes were subtly brilliant. Andrews implored with open palms and exasperated looks. Morrison dealt out cold shoulders, hands on hips and an upturned nose.

Reminded of that performance, Morrison is almost giddy. "My friend said: 'That wasn't attitude -- that was altitude!' Teddy wrote a whole book of songs. He gave me that one, "Don't Touch Me." That was one of my favorite concerts."

Veteran pianist Mance will be among the two dozen or so performers on hand at Local 47. His long history of accompanying vocalists, includes Joe Williams, Carmen McRae and Irene Kral, one of L.A.'s best jazz singers. Although they've worked together only a handful of times, Mance feels that Morrison compares favorably.

"Barbara's one of my favorites," he says from his New York home, "because of the way she sounds. She's got one of the best sounds since Dinah Washington. I think of Barbara the way I think of Irene: reminiscent of others but they both did their own thing."

"When we started working together," he says, "I hadn't heard a sound like that in ages. It was real -- no phoniness. And, of course, she sang a lot of blues, which I truly love. There are some pros that can't sing, but she's a teacher, so she really knows what she's doing."

Morrison recounts how the problem with her leg began as something small:

"I had a piece of skin on my toe and I pulled it off. The sore kept getting bigger and I went to the doctor. He said they had to remove my foot. After that, it was my leg. I said, 'Just as long as I'll be able to sing -- do what you have to do.'" The operation went smoothly and Morrison looks to make a good recovery.