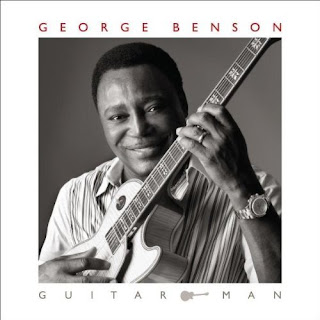 Once in a while, we have a "comeback jazz album" delivered by one of the Top 5 jazz guitarists of all time, George Benson. The extremely versatile artist, catapulted to pop stardom as a singer via "This Masquerade" (from the million-selling "Breezin'" magnificently orchestrated by my friend Claus Ogerman), once in a while announces a return to his jazz facets. Many of these highly anticipated projects were very disappointing smooth-jazz offerings, like his previous soporific "Songs and Stories," which was closer to poor instrumental pop than anything else despite the presence of Marcus Miller and other heavyweights.

But now, the New Jersey-based Benson promises a "true jazz guitar album" scheduled for release on the Concord label next October 4. Simply titled "Guitar Man," it's actually a mix of pop hits from the Beatles ("I Want To Hold Your Hand") and Stevie Wonder ("My Cherie Amour," previously recorded by GB for "Tell It Like It Is" in the late 60s during the A&M/CTI years), some GAS standards ("Tenderly," "My One and Only Love"), old Benson favorites like "Tequila" (jazzified by his idol Wes Montgomery at Creed Taylor's suggestion), "Since I Fell For You," the opening tune "Tenderly" (previously recorded as the title track from his 1989 excellent project with McCoy Tyner & Marty Paich), and "Danny Boy" (often played as a solo guitar number on his live concerts).

I really wanna hear this new CD with no prejudice, but something tells me I'll be soon after returning to "White Rabbit," "Bad Benson," "The Other Side of Abbey Road," "Livin' Inside Your Love," "In Flight", "In Concert - Carnegie Hall," the long-forgotten gem "Pacific Fire" (never reissued on CD not even in Asia!), "Weekend in L.A." and "Breezin'". If I were a millionaire, I would reunite Benson with Don Sebesky & Claus Ogerman in the same album, inviting Creed Taylor & Tommy LiPuma to co-produce it. Guess what the Gods would say?

The press release follows:
Grammy-winning legend George Benson brings his guitar to the forefront in his newest album Guitar Man. The 12-song collection includes a mix of jazz and pop standards - some in a combo setting and some solo, but all of them tied together seamlessly by Benson's soulful and exploratory signature sound.

Lending a hand on this recording is a solid team made up of veterans and newcomers alike - pianist Joe Sample, keyboardist and musical director David Garfield, bassist Ben Williams and drummer Harvey Mason. Williams is one of the hottest up-and-coming new artists on the jazz scene. Mason is a regular member of Fourplay, and a studio collaborator with Benson all the way back to Benson's 1976 blockbuster album, Breezin'.

In a career that spans five decades, more than 30 recordings as a leader and ten Grammy Awards, Benson has used his jazz roots as the foundation for an engaging mix of pop, R&B and other shades that add up to a style that appeals to a broad mainstream audience. Along the way, he has also established himself as a formidable jazz singer - one whose biggest career hits have showcased his vocals. But Guitar Man is just what the title implies - an album that highlights Benson's unparalleled guitar playing, perhaps more than any other album he has released in decades.

For the new project, the crew came together in the studio with a minimum of prior rehearsal time but an eagerness to jump in and lay down tracks in something very close to the live experience - what Benson describes as an "old school" approach. The impromptu sensibility comes across in the final product, much of which came together with minimal takes in a single day of recording.

"We figured that we would get the best energy if we went into the studio with some live musicians who are savvy and flexible," says Benson, "and boy, did we accomplish that." On Guitar Man, Benson's mastery of the guitar is demonstrated in a variety of styles and settings, all with legendary jazz roots. Benson has never been one to shy away from innovation or experimentation. For this guitar man, putting a jazz spin on pop standards - not just on this recording but throughout his career - is less of a taboo when you're willing to dispense with labels and the limitations that come with them.