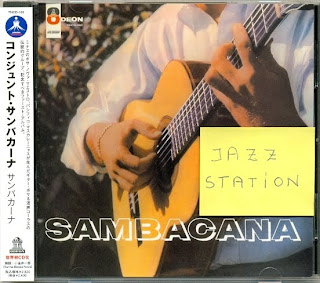 Two albums by the Sambacana project, created by the Brazilian composer Pacífico Mascarenhas, are being reissued today on CD format in Japan. Both are being advertised as the first official Samabacana CD releases, although they had been previously reissued in Brazil in 2005, through Pacífico's own independent label, in limited issues that could be found basically only in Belo Horizonte, the city of Minas Gerais where he was born and still lives.

These Japanese CD reissues, available through HMV-JP, were produced by Masahiro Ishigame, Hiroyuki Sugimoto & Keisuke Taniguchi for Think! Records and distributed by Disk Union. Unfortunately, they have used vinyl sources for the digital remasterings, instead of the original master tapes. Anyway, both are highly recommended due to the musical content.

"Sambacana," the group debut album - actually, I think it's more appropriate to call it a "project" instead of a group, since Pacífico used to chose different musicians and singers to each album, and there was never a live performance by any of the Sambacana incarnations (!) - was recorded in 1964, in Rio de Janeiro, for the Odeon label. None of the musicians or singers were credited in the original LP release, except the arrangers Ugo Marotta and Roberto Menescal. But one of the singers is Joyce Moreno - the others remain unknown and, oddly, not even Pacifico Mascarenhas mention them in his official website. The entire album was performed by Menescal's group: Eumir Deodato (acoustic piano & Hammond organ), Sergio Barroso (acoustic bass), João Palma (drums), Ugo Marotta (vibes), Henri Ackselrud (flute) and Menescal himself on the guitar.

"Pouca Duração" and "Começou de Brincadeira" became Pacífico's most famous compositions, due to the fact that, a few months later, both were covered by Deodato -- leading his band Os Catedráticos -- on the "Impulso!" and "Tremendão" albums, respectively. Most recently, singer Anna Ly and guitarist Marcio Correa recorded the two songs on their "What A Wonderful Bossa World" CD, produced by Arnaldo DeSouteiro for JSR in 2006. Other highlights from "Sambacana": "Olhando Estrelas no Céu," "Foi Assim," "Mandrake," "Quanto Tempo" and "Amor em Quatro Estações." 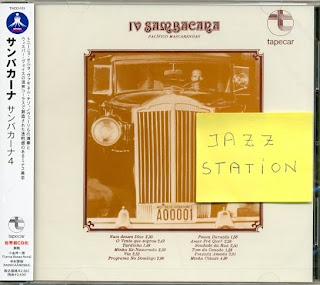 Posted by Arnaldo DeSouteiro at 11:54 AM