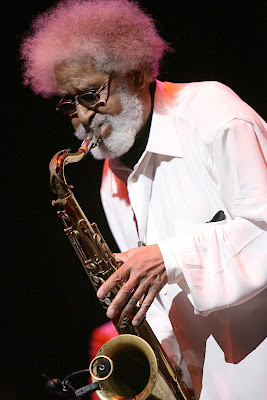 “Rollins could have been an emblem of the Monterey Jazz Festival itself —
which combined historic wisdom and youthful zest.” – Seattle Times

“Highlights of the festival were undoubtedly the young American saxophonist Tia Fuller and the exceptional, Japanese pianist Hiromi Uehara…Her playing is so powerful that for certain parts of her music, she got off the piano bench and kept playing while standing.”– Der Spiegel

“A strong focus on female composers and bandleaders was the hallmark and highlight of the weekend, but only one aspect of a diverse roster that spanned genres and generations, opening with one of the music’s brightest young stars in Robert Glasper, closing with one of its mightiest veterans in Sonny Rollins.” – Jazz Observer

“Saturday at the Monterey Jazz Festival was a journey through eras, river basins,
continents, climate zones, you name it.” – International Review of Music

“The people who come here like this vibe, and follow this music enough to plan their whole vacations around it. There's a real loyalty to this whole experience. Not just gorging yourself on music, but being able to eat in the food court with Gerald Wilson or Poncho Sanchez.” – National Public Radio’s A Blog Supreme

“…the performances by Richard Bona/Raul Midon and India.Arie/Idan Raichel demonstrated a wider net than the usual predominant Latin jazz subset, and it was refreshing to experience the embracing collaborations between different cultures, a theme worth its weight in gold.” – Monterey County Herald

“…the Monterey Jazz Festival…a potent cultural institution, on the West Coast and in the world.” – Santa Barbara Independent

“…the best weekend of jazz you're ever going to witness.” – Monterey County Herald

“…this weekend’s festival was a joy, if an exhausting one – a 53-hour infusion of music…” – San Jose Mercury News

“This is a full-service, style-inclusive festival—still the best in the west and probably the best American festival overall…” – JazzTimes

The 54th Monterey Jazz Festival wrapped up Sunday, September 18th after a weekend of stunning weather and incredible performances by debut artists and old favorites alike.

38,000 fans came through the gates of the Monterey County Fairgrounds during the weekend of September 16-18, which featured music from around the globe and from all styles of classic jazz, compelling conversations and films, and engaging exhibits.

The thrilling weekend got off to an explosive start in the Arena on a warm Friday night with a high energy set from Hiromi: The Trio Project featuring Anthony Jackson and Simon Phillips (who was perhaps playing the largest drumset ever seen at the Festival in 54 years), followed by the debonair John Pizzarelli Quartet and Poncho Sanchez and his Latin Big Band featuring Terence Blanchard (who would appear at least three more times over the weekend).

On the Grounds, Robert Glasper, the festival’s Showcase Artist, put in the first of three world-class sets, followed by the electric Eric Telford Collective and the other-worldly Berklee Flamenco. In the Night Club, things got underway with the Festival’s first ever live Webcast, featuring Carmen Souza, John Santos and Juan-Carlos Formell -- a Latin-jazz extravaganza. Helen Sung put in three sets of alternately rollicking and delicate sets in the Coffee House, and in Dizzy’s Den, Raul Midon and Richard Bona put in a virtuoso set of world music and jazz, followed by fusion from Hiromi for her second set (after four golf carts transported Simon Phillip’s drumset from the Arena Stage).

The Arena’s Saturday shows got the day off to a blistering start with An Afternoon in Treme when the Soul Rebels Brass Band marched into the Arena and took the stage by storm, alternating with the rowdy Dumpstaphunk, with actor Wendell Pierce as emcee in a tribute to the New Orleans Neighborhood that has spawned many important musical traditions. Augmented by trumpeters Kermit Ruffins and Terence Blanchard (subbing for Glen David Andrews), the set got the Arena on its feet and the sawdust in the air. Huey Lewis and The News followed, performing a crowd pleasing set of Memphis favorites and original hits to an appreciative crowd.

The evening shows were a varied bunch, beginning with Geri Allen and Timeline, performing “The Dazzler,” the Monterey Jazz Festival commission for 2011, featuring tap dancer Maurice Chestnut. Joshua Redman and James Farm put in an inspired set, followed by Herbie Hancock, who performed a set of his own jazz standards.

Saturday’s Garden Stage got off to a hot start with Mitch Woods and his Rocket 88s, followed by second sets from the Soul Rebels and Dumpstaphunk, this time with special guest, drummer Greg Errico, who reprising hits from Sly and the Family Stone. Richard Bona and Raul Midon also played an inspired second set, with Elio Villafranca closing out the Garden Stage’s for Saturday. Dizzy’s Den was the focus of conversations, with Donny McCaslin taking the DownBeat Blindfold Test, and a insightful discussion between Wendell Pierce, Clint Eastwood and Ashley Kahn about Jazz on the Screen. In the evening, Robert Glasper played his second set of the weekend, this time with special guest Lionel Loueke, followed by a repeat performance from the John Pizzarelli Quartet and Joshua Redman with James Farm, all to a packed Dizzy’s Den.

Continuing the live Webcast in the evening, the Night Club featured vocalist Pamela Rose’s Wild Women of Song; the angular bop from the Scott Colley Trio and plugged-in Donny McCaslin Group. In the Coffee House, fans were treated to sets from the Sarah Wilson Quintet, Berklee Flamenco and the Bill Carrothers Trio. On the West Lawn, the John Brothers performed their barrelhouse repertoire on beat-up pianos, adding a level of humor and lightness to the afternoon.
Musical Highlights: Sunday

Sunday’s Arena shows began with a youthful start with the winner of the Next Generation Jazz Festival, the Los Angeles County High School for the Arts, making their fourth appearance on the Jimmy Lyons Stage in the last five years, followed by the outstanding Next Generation Jazz Orchestra, which featured the country’s finest high school student musicians. Alumni Benny Green, Donny McCaslin and Joshua Redman made special appearances with the NGJO – Donny McCaslin’s solo proved to be of the most exciting of the weekend! India.Arie and Idan Raichel made an inspiring and uplifting appearance, making very different and peaceful music. The evening’s performances in the Arena began with a setting sun and the Still Ahead Orchestra performing the music of Miles Davis and Gil Evans, bringing tears to some members of the audience in a profoundly moving experience. Sonny Rollins then closed out the weekend, performing an energy-filled 100-minute set that belied his 81 years.

Sunday’s Grounds performances included USC’s Thorton School of Music Jazz Orchestra, the John Donaldson Quintet and Cow Bop in the afternoon on the Garden Stage, followed by the standout performance of the Tia Fuller Quartet and Steve Coleman and Five Elements. The Night Club presented seven youthful groups from the Next Generation Jazz Festival, followed by the final Web streams from the Benny Green Trio with Donald Harrison playing Monk; and the Robert Glasper Experiment with special guest Bilal. Dizzy’s Den began with conversations about the Art of Impulse, followed by a lifetime of experience with NEA Jazz Master Orrin Keepnews. The Will Blades and Joey DeFrancesco Trios kept things greasy at the end of Sunday evening with the Hammond B-3 Blowout, with Bobby Hutcherson sitting in with Joey as a special guest. In the Coffee House, Zun Zun and the Chase Morrin Group kept things happening with a youthful edge, followed by two virtuosic sets of solo piano from Eldar Djangirov.

All weekend long, fans were treated to the gallery exhibit Art of Impulse and the films Cachao: Uno Mas, More to Live For and Dave Brubeck: In His Own Sweet Way; and Judy Roberts on the Yamaha AvantGrand with Greg Fishman on saxophone, greeting fans as they visited the Festival's Food Court.

MJF partners provided activities and events throughout the Festival weekend to enhance the Festival experience for fans. Amoeba Records was set up at the center of the Midway, featuring CDs, rare vinyl and artist meet and greets. North Coast Brewing Company, celebrating their 6th year as Official Monterey Jazz Festival Beers, offered Brother Thelonious merchandise on the Midway. Carmel Road Winery, Official Wines of the Festival, offered tastings in the Festival's Premier Access Club. The Inns of Monterey and The Jazz Cruise both had a presence on the Grounds, and media partner KGO Newstalk 810 AM hosted a tent on the Midway with a visit from popular KGO afternoon host Gil Gross. DownBeat, another Festival media partner, hosted a booth on the Midway as well. In addition to providing instruments for the Festival's needs, Yamaha hosted the popular Instrument Petting Zoo featured during Sunday's Family Day.

The free Webcast, one of the most anticipated developments of the 54th Monterey Jazz Festival, resulted in over 3000 people from 59 countries tuning into the stream all weekend, made possible by tech partners StreamGuys, Meraki, and Alvarez Technology Group, and was streaming live on the Festival’s website, NPR’s A Blog Supreme, and KUSP. The free Festival App was also a hit, with over 1000 people downloading it for their personal use during the weekend.

The 55th Annual Monterey Jazz Festival will take place on the Monterey Fairgrounds, September 21 - 23, 2012, with over 500 artists performing on 8 stages for 3 nights and 2 days of the world's best jazz.
Posted by Arnaldo DeSouteiro at 6:01 AM