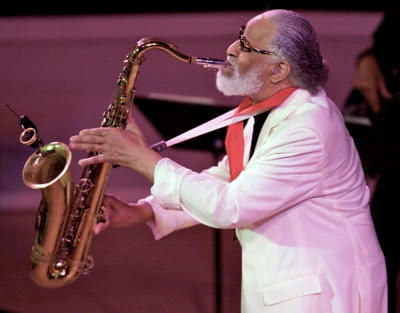 Sonny Rollins is one of five individuals who have been selected to receive the Kennedy Center Honors of 2011, it was announced today by the John F. Kennedy Center for the Performing Arts. These individuals' "collective artistry has contributed significantly to the cultural life of our nation and the world," said Kennedy Center Chairman David M. Rubenstein.

Along with fellow recipients singer Barbara Cook, singer and songwriter Neil Diamond, cellist Yo-Yo Ma, and actress Meryl Streep, Rollins will be honored at the 34th annual national celebration of the arts on December 4.

"I am deeply appreciative of this great honor," says Rollins, who turns 81 today. "In honoring me, the Kennedy Center honors jazz, America's classical music. For that, I am very grateful."

On Sunday, 12/4, on the Kennedy Center Opera House stage in Washington, DC, the 2011 Honorees will be saluted by great performers from New York, Hollywood, Nashville, and the arts capitals of the world. Seated with the President of the United States and Mrs. Obama, the Honorees will accept the thanks of their peers and fans through performances and heartfelt tributes.

The President and Mrs. Obama will receive the Honorees and members of the Artists Committee who nominate them, along with the Kennedy Center Board of Trustees, at the White House prior to the Gala performance. The 2011 Kennedy Center Honors Gala concludes with a supper dance in the Grand Foyer.

The Kennedy Center Honors medallions will be presented on Saturday, 12/3, the night before the Gala, at a State Department dinner hosted by Secretary of State Hillary Clinton.

The Honors Gala will be recorded for broadcast on the CBS Network for the 34th consecutive year as a two-hour primetime special on Tuesday, 12/27 at 9:00 pm (ET/PT).

Rollins's attendance at the Gala will mark his second visit to the nation's capital this year for the purpose of collecting a major award; in early March, President Obama presented him with the National Medal of Arts. Next month (10/10), the saxophonist returns to Washington for a performance at the Kennedy Center.

His other 2011 concerts include three in California this month (9/18 Monterey Jazz Festival; 9/22 Royce Hall, Los Angeles; 9/25 Segerstrom Center, Costa Mesa). He will perform at the Schermerhorn Symphony Center in Nashville on 10/14. 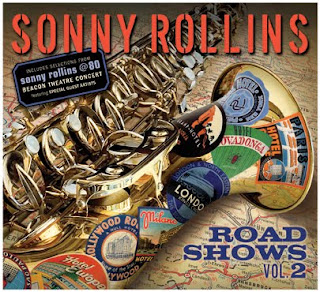 Next Tuesday, 9/13, Sonny Rollins's new CD "Road Shows, Vol. 2" will be released by Doxy/Emarcy Records. Four tracks on the new disc were recorded at his September 2010 @80 birthday concert in New York, with special guests Roy Hargrove, Jim Hall, Christian McBride, Roy Haynes, and -- in their first meeting on record -- Ornette Coleman. "Even in all this illustrious company, some of it 40 years younger," wrote Thomas Conrad in this month's JazzTimes magazine, "the player here with the most ideas, the most muscle, the most stamina, the most juice, is Sonny Rollins."

For further information about the Kennedy Center Honorees, contact:
John Dow, The Kennedy Center
202-416-8448
jrdow@kennedy-center.org
Posted by Arnaldo DeSouteiro at 11:57 AM