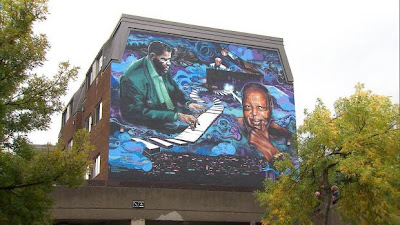 (The mural, located at the corner of Saint-Jacques and Des Seigneurs streets, honouring Peterson was unveiled Thursday.)

A new mural honouring jazz artist Oscar Peterson was unveiled Thursday in the Montreal neighbourhood where he was born and raised.

The mural, created by Montreal artist Gene Pendon, was painted on a building at the corner of Saint-Jacques and Des Seigneurs streets.

It’s right across the street from the Oscar Peterson Park. 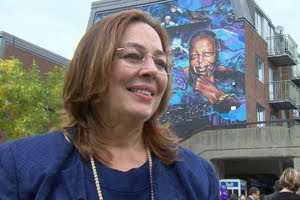 Peterson's widow, Kelly, said he always had fond memories of growing up in Little Burgundy. CBC “I am overwhelmed and I am so pleased for Oscar to be a visible part of this community for a very long time,” said Peterson’s widow, Kelly Peterson.

"It was very important to him to always keep in mind where he came from and to always be a part of the community."

Oscar Emmanuel Peterson was born on Aug. 15, 1925 in the city's southwest. He went on to become an internationally recognized and highly-regarded jazz musician.

He played with some of the biggest artists in the business and received a host of awards and accolades including the Order of Canada and the Governor General's Performing Arts Award for Lifetime Achievement.

At the mural unveiling Thursday, Michael Farkus, director of the local youth centre, said the work prominently displayed in the place of Peterson’s roots would show young people what possibilities could lie ahead.

“It will inspire the youth and give a different perception to see that good things very good things come out of Little Burgundy.”
Posted by Arnaldo DeSouteiro at 4:15 PM