Louis Armstrong's "Live in Germany" to be released next week on vinyl format! 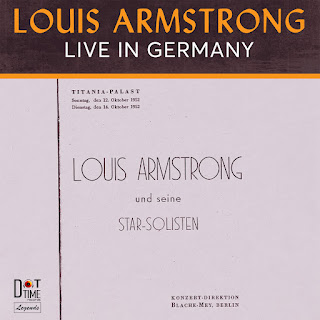 At long last, after a bit of a delay, Louis Armstrong "Live in Germany" will finally be released next Friday, December 13th, on vinyl format.

A CD version, with the alternate title "Live in Europe," includes Satchmo's live dates in Paris- due out on vinyl next year.

Part of Dot Time’s Legacy Series, and the fourth Armstrong release on the label, "Live in Germany" features the audio from a Titania Palast-Berlin recording of Louis and his All Stars which was initially broadcasted on RIAS (Radio in the American Sector). Armstrong’s band in 1952, featured Trummy Young on trombone, Bob McCracken on clarinet and vocals, Marty Napoleon on piano, Arvell Shaw on bass, Cozy Cole on drums and Velma Middleton on vocals.

Armstrong made his first tour of England in 1932 and then lived in Europe between July 1933 and January 1935. This 1948 performance as the headliner of the Nice International Jazz Festival marked the consummate trumpet player’s return to Europe. British trumpeter Humphrey Lyttelton caught Armstrong’s performance and vividly recalled how he found himself “quaking at the ferocity with which he directed the band. If Sid Catlett’s drums started to intrude too heavily upon a solo, Louis would turn to him and hiss at him like a snake. And more than once Earl Hines’s exuberance was curbed by a sharp ‘Cut it boy!’”

The 1948 concert at the Nice Opera House sees a flawless performance from Louis and the All Stars.  A showcase of the virtuosity of the ensemble, the unmistakable sound of Earl Hines on piano adorned with the Teagarden’s masterful trombone performance, is a treat to audiences. However, Armstrong demonstrates that he’s the leader on each track, whether shooting for the fences with some fierce improvising on “Panama”, scatting like a demon on “Them There Eyes” or making a serious statement on “Black and Blue.”

Louis and the band started the evening with a groundshakingly ebullient version of Kid Ory’s “Muskrat Ramble”, ending with a pleased Armstrong exclaiming “Yeah!” In his trademark grumble.  The spellbound audience roars with applause as the band transitions into the endearing call-and-response of Hoagy Carmichael’s “Rocking Chair”.  Next, the band features Barney Bigard demonstrating his facility on the clarinet over Benny Goodman’s standard “Rose Room”.  The band ends the iconic piece with an extended glissando from Bigard’s clarinet, this dazzling high note, held for nearly 20 seconds, leading to the songs closing downbeat, arouses an unparalleled excitement from the audience.

Armstrong’s voice is truly energetic and refined on these recordings.  Ironically, Promoter Ernie Anderson remembered Armstrong’s manager Joe Glaser telling him before a trip to Europe, “Whatever you do, don’t sing. These are all foreigners. Remember, they don’t understand English.” Armstrong “nodded gravely” but according to Anderson, “It should be noted that Louis completely ignored Joe Glaser’s instruction not to sing. He opened every concert singing Fats Waller’s paean to the racial mood in America, ‘Black and Blue.’ It was always marvellously received.”  We, as listeners, can only be grateful that Glaser’s request fell upon deaf ears. 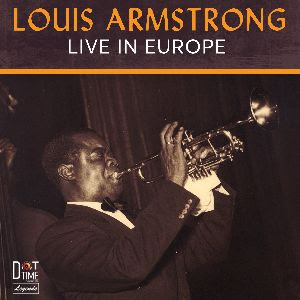 The 1952 recordings in Berlin saw a slew of personnel changes.  Armstrong’s longtime collaborator Arvell shaw reprised his role on the upright bass while Cozy Cole replaced the ailing Catlett in 1949.  Bigard was replaced by Texas-born clarinetist Bob McCracken. Pianist Marty Napoleon and trombonist Trummy Young brought a new, exciting energy to the outfit.  The recording includes a comic duet with Middleton on “Can Anyone Explain,” a slow, throwback instrumental treatment of “Tin Roof Blues” and one of his biggest Decca hits of the period, “A Kiss to Build a Dream On.”

Reminiscing to Edward R. Murrow in 1955, Armstrong said, “We played in Germany one concert, the first time we went there, and the people was sitting there with those lorgnettes when they first come in. And when we got down to ‘The Bucket’s Got a Hole in It,’ they put  them down and [starts clapping and stomping his foot], ‘Yeah, Daddy!’”  This new-found treasure goes far to capture the ebullient nature of Satchmo’s performances in Europe that seems to surpass even the vitality of the artist’s home-country performances.  Says the maestro himself, “That's why the people in Europe, they get the benefit of this music that America sleeps on…”.

Series producer Jerry Roche states, “Producing this music will mean people can connect again with the greatness of Louis Armstrong.”

Previous Dot Time Legacy Series Armstrong Releases include:
Volume 1 – The Standard Oil Sessions
A 55 minute recording was recorded in San Francisco, California on January 20, 1950 by the Standard Oil Company for their radio show, “Musical Map of America.” The recording was episode 19, “Musical Story of New Orleans,” and featured Armstrong, Jack Teagarden and Earl Hines. For reasons not known, the broadcast was never made and Armstrong was given the acetate discs of the sessions.

Volume 2 – 1950’s Club Performances
This release includes live club recordings from Storyville, Blue Note and a selection of European shows. Musicians include Jack Teagarden, Earl Hines and Cozy Cole among others. Louis Armstrong recorded multiple radio broadcasts of his nightclub appearances and in many cases the acetate recordings were given personally to Louis Armstrong after broadcast.

Volume 3 – 1964 Sparks, Nevada Concert
A rare live concert recording by the All Stars from Sparks, Nevada recorded in June of 1964 (right after “Hello, Dolly!” became a number one single) featuring Russell “Big Chief” Moore, Joe Darensbourg, Billy Kyle, Arvell Shaw, Danny Barcelona and Jewel Brown. This concert was professionally recorded and given to Louis Armstrong, who dubbed it to two separate reels.

Each of the four releases in the "Legacy Series” are available in a limited edition collector's version featuring exclusive packaging and a 20-page booklet written by Ricky Riccardi - Director of Research Collections for the Louis Armstrong House Museum and author of best selling book “What A Wonderful World.” This booklet also contains rare photo material held in the Louis Armstrong Archive. 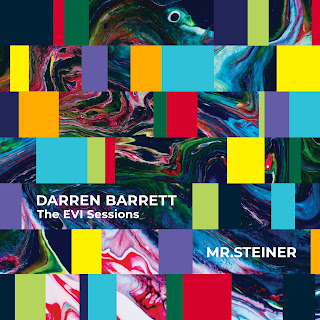 On his 11th release as a leader, Darren Barrett continues to solidify his position as one of the foremost innovators and forward thinkers in the contemporary jazz realm. The foundation for this electronic exploration was laid on "The Opener" in 2017 (“Jazz’s future may very well sound like this,” said Downbeat Magazine), which infused soundscapes and samples in modern jazz setting, and built upon on "Time For Romance: But Beautiful" (2018), a ballads record awash in brilliant sound design. Now with "Mr. Steiner," Barrett once again showcases the tremendous possibilities for invention when undeniable talent meets ingenuity.
Posted by Arnaldo DeSouteiro at 10:32 PM No comments: