Brad Mehldau's article for The Guardian

Blank expressions: Brad Mehldau and the essence of musicAre the saddest songs really written by tortured souls – or do we just project our own feelings on to them? 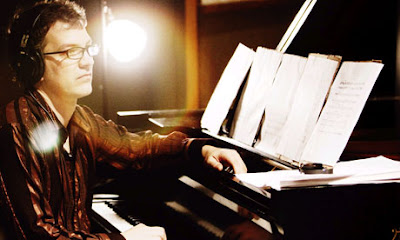 Music often seems to suggest an emotion or a state of being – we reach a consensus, for example, that one piece of music expresses carefree youth, while another expresses world-weary wisdom. But is music properly expressing anything? Here's Stravinsky on the subject in 1936, from his autobiography: "For I consider that music is, by its very nature, essentially powerless to express anything at all, whether a feeling, an attitude of mind, a psychological mood, a phenomenon of nature, etc … Expression has never been an inherent property of music … It is simply an additional attribute which, by tacit and inveterate agreement, we have lent it, thrust upon it, as a label, a convention – in short, an aspect unconsciously or by force of habit, we have come to confuse with its essential being."

Alas, Stravinsky does not tell us what music's "essential being" is, only that we have mistaken the property of expression with it. He seems to be repeating the gambit of thinkers from Plato onward – he tells us that what we observe is false, posits another realm that is more real, but gives us no concrete information about it. There is no information to give, after all – what is essential lies beyond our reach; we're stuck in our empirical shallowness. Essentialist tropes are everywhere in discussions about music, smugly short circuiting further inquiry, maintaining: "We cannot put in words what is essential about music."

It is probably more reasonable to say we cannot put in words what is essential about anything. Essence is a cipher, a phantom, and a perilous one at that – by the time Stravinsky was writing those words, essentialist ideas were being stapled on to notions of race and nation with horrific results. These kinds of tropes about music always persist, though, because music acts like language in its ability to represent things, yet its mode of expression, if Stravinsky will pardon us, is free of language. So we see it as the ideal form of communication – one that supersedes language. The irony and ultimately the weakness of this viewpoint is that our ability to posit this idealised communication is dependent on the very language that we wish to transcend. Language is simply feasting on itself, on its own poverty – it has revealed nothing about music.

Was Stravinsky merely perpetuating a kind of sophistry? For years, his statement confounded and bothered people who took it at face value, assuming that he meant music is not expressive, period. In 1962, he clarified what he meant – a little grumpily: "The over-publicised bit about expression (or non-expression) was simply a way of saying that music is supra-personal and super-real, and as such, beyond verbal meanings and verbal descriptions. It was aimed against the notion that a piece of music is in reality a transcendental idea 'expressed in terms of' music, with the reductio ad absurdum implication that exact sets of correlatives must exist between a composer's feelings and his notation. It was offhand and annoyingly incomplete, but even the stupider critics could have seen that it did not deny musical expressivity, but only the validity of a type of verbal statement about musical expressivity. I stand by the remark, incidentally, though today I would put it the other way around: music expresses itself."

So Stravinsky wanted to do away with a subtle but pervasive notion: that of a pre-existing idea or emotion that a composer will then set to music. A composer does not "feel sad" and then write "sad" music; that is a childishly reductive view of how music is created. It is the listener, after all, who assigns meaning, ideas and emotions to music once he or she hears it. We commit a blunder when we imagine a transcendental idea that existed before music, like one of Plato's ideal forms.

When Stravinsky says "music expresses itself", he is speaking of the process by which it comes into being – for himself at least. It does not borrow from language to generate itself; the composer does not have to have a particular feeling as he composes. Music's abstract quality – the way in which it does not refer to something other than itself – gives it autonomy in this reasoning.

This is not cut and dried, of course. Someone could point to any number of works that seem to be driven by a specific idea, or music that we retrospectively know was inspired by specific feelings – happy, sad, what have you – that came about from an event in the composer or performer's life. Many of Stravinsky's works seem to be related to a concrete idea – an imagined primitive ceremony, famously, in The Rite of Spring. And I'm excluding music with words, which is a whole other matter.

Stravinsky's statement was probably born out of frustration, as he repeatedly encountered reductive, mistaken characterisations of the composer's creative process. To the extent that he is correcting that reduction, I agree with him. It is easy to demonstrate the validity of his view by considering perceived youth in one work, and wisdom in another.

How was Schubert able to think up music like that – music that telegraphed the emotions of desire, fear, passion and unrest so uncannily? Doesn't it take wisdom to portray emotions like that? From where did young Schubert's psychological insight into female desire come? From what deep, sad place did a song like Hendrix's The Wind Cries Mary emerge; what informed the ecstasy of his Third Stone from the Sun – memories of high school?

It was not wisdom that comes with age, strictly speaking, in any of those cases. In day-to-day life, wisdom means we have grown older, we have learned much through numerous experiences, some painful and some pleasurable, we have reflected on them, and we base our observations, judgments and actions on them. Music is different. A musician does not necessarily need a wealth of experiences to express something that others will find profound. He or she obviously needs some – you can't live in a cave and pop out and start waxing profound – but not as many as one would expect. A musician can demand our attention without having necessarily lived many years.

That suggests musical wisdom has different rules than the wisdom that tells someone, for instance, not to argue a point, because he's argued it so many times before and it's an argument he can't win; or the wisdom that helps an older guy win the affection of a beautiful younger woman for a night because he understands her – he knows what she wants to hear more than the twentysomething guy vying for her attention. The twentysomething guy, on the other hand, might be arguing shrilly about politics, full of youthful stridency, sounding self-important to everyone except himself; he might be saying all the wrong stuff to the girl at the bar while the silver fox steals her away. But that night he might go home and write some music of profundity, music that has no stridency, music that bewitches us and soothes us.

Should we say, then, that musical wisdom arrives somehow faster than normal wisdom? That hypothesis won't do, though, because, in essentialist fashion, it brackets out the experience of composing and playing music from other experiences. There must be some way to account for the ability of musical expression to arrive before the depth of experience it seems to convey. The key word there is "seems" – it takes us back to Stravinsky, who would say, simply, that music only "seems" to convey wisdom; there is not a shred of actual wisdom in it at all. Music is only representing wisdom for a group of listeners; it is not properly exuding it. So let us not assign this agency to music; let us more accurately say that the group of listeners is attaching a quality to the music – it comes from them.

That works the other way around as well: Older musicians and composers create "youthful" music – music that sounds quirky, full of anxious energy, untamed – awkward, jagged, rhapsodic, or even foolish – at a station in their lives where they are not particularly anxious, foolish or awkward in their bearing at all. (Brahms' Double Concerto is a beloved example for me.)

This should be good news for the listener. I propose that we never grow out of good music – the whole idea is nonsense. Anything that is strong stays with us our whole lives. We forget about music sometimes, but then we come back to it, and it yields fresh pleasure and insight, along with a beautiful, bittersweet cadence of our past merging with the present moment. Thank goodness it is this way; thank goodness great music isn't "age sensitive" – what a sad world that would be!

Rock'n'roll is often by definition a young man's game – Led Zeppelin, the Who, the Beatles, Jimi Hendrix or the Rolling Stones released some of their most enduring music before they were 30. We don't stop listening to their music past the age of 30, though. Any music that is strong will speak to us in different ways at different points in our lives, and will never truly grow irrelevant.
*****************
Brad Mehldau plays at the Wigmore Hall, London, tonight. Details: wigmore-hall.org.uk. His album "Modern Music" is released on Monday on Nonesuch.

Posted by Arnaldo DeSouteiro at 4:12 PM