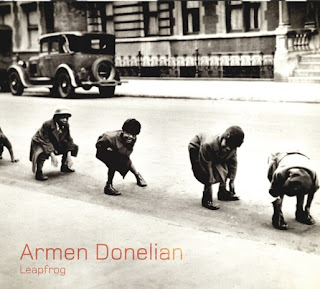 Back in 1976, probably due to some "mistake," RCA released in Brazil a Mongo Santamaria album titled "Sofrito" licensed from Vaya Records. I was familiar with Mongo's earlier work, but that LP really surprised me due to the excellent repertoire of original tunes and the superb performances of two musicians who were "new" to me: Roger Rosemberg, arguably the warmest and most lyrical baritone sax player since Gerry Mulligan -- besides the fact that he was also playing bass clarinet, soprano sax and alto sax --, and keyboardist Armen Donelian.

For sure Mongo also had the good reputation as a great bandleader thanks to his ability to bring together new musicians in memorable groups. Just think about the guys who occupied the piano chair on his bands during the 60s: Rodgers Grant, Brazilian genius João Donato and Chick Corea. In the 70s, Armen Donelian was added to the list.

Oddly, except Corea of course, all others remained extremely underrated in the USA, although regarded as "musicians' musicians" by his peers.

Listening to Donelian on "Sofrito" was a huge pleasure. On the top of his own killer grooves and notable solos on both acoustic & electric pianos, he once in a while overdubbed a Hohner clavinet and some synths like the Arp Strings that added extra orchestral colors to the scores. Besides such incredible performances, Donelian also wrote and arranged my three favorite tracks from that album: "Spring Song," "Cruzan" and a Spanish-tinged samba titled "Iberia."

Since then I tried to keep Armen on my radar, but it was difficult. His low "popularity" wasn't compatible with his talent. "Leapfrog" may change it a little, at least in the "jazz magazines circle" that only praises people like Brad Melhdau and Jason Moran, always looking for novelties. Armen is now on a prestigious label (Sunnyside), has the support of one of the best jazz publicists in the world (Terri Hinte deserves to be credited), and offers a tremendously impressive and creative body of work.

The level of density, intensity and energy on his playing is also noticed on (and in perfect sync with) the contributions of all the other musicians, specially Mike Moreno (gorgeous tone, playing a Stephen Marchione guitar) and Marc Mommaaas. They can't be called sidemen here. They're an integral part of the overall challenging experience, making contemporary jazz of the highest caliber.

Highlights: "Rage," "Bygone" (only piano, bass & sax), "Smoke" and "Inner Sanctum." All tunes composed by Donelian, except "Bygone," written by tenorist Mommaas.
***********
Pianist, composer, bandleader, and educator Armen Donelian has carved out an enviable career spanning four decades, including seminal stints with Sonny Rollins, Billy Harper, Chet Baker, and Mongo Santamaria. His new album "Leapfrog," his ninth release for Sunnyside, due for release tomorrow, September 13, should go a long way in rectifying his relatively unsung status as an improvising artist of the highest order.

“The inspiration for this music came from my reflections on where the world is going these days,” Donelian says. “There’s so much regurgitation of older styles in jazz today, I feel the need to carry the ball a little further. As Diz once said, it’s about keeping one foot in the tradition, and one in the future.”

Determined to distill each composition to its essentials, Donelian has honed a group concept that flows from his belief that less is indeed more. “I like stating an idea and leaving space for listeners to absorb it,” Donelian says. “It’s especially important for band members to be mindful of space, so they can really hear each other. When there’s too much happening there’s not much listening going on.” One explanation for the band’s profound affinity for Donelian’s music is that he shares significant history with these players, and often helped shape them during their formative years.

His collaboration with Dean Johnson stretches back to the 1980s, when Johnson was establishing himself as an in-demand accompanist through his work with Gerry Mulligan. Donelian met Marc Mommaas while teaching at the Manhattan School of Music shortly after the saxophonist arrived in New York City from the Netherlands; they’ve developed potent bandstand chemistry over the past decade.

Donelian first met Mike Moreno while teaching in the New School’s jazz program about ten years ago, just as Moreno was starting his ascent to his current status as one of the most esteemed young guitarists in New York. And he encountered Tyshawn Sorey as a standout high school student in the mid-1990s, a relationship that continued when the drummer enrolled in William Paterson University, where Donelian is also on faculty.

Born in Queens, NY in 1950 to Armenian parents, Armen Donelian grew up in a multicultural household, surrounded by classical and Armenian music. His first exposure to jazz came at age 12, and as a Columbia University undergrad he studied music history, theory, and composition; but his jazz studies commenced in earnest after his graduation, when he fell under the sway of pianist Richie Beirach.

During that time Donelian apprenticed with a series of jazz giants, starting in 1975 with Mongo Santamaria, where he presided over the piano chair once filled by Herbie Hancock and Chick Corea. “I learned so much about time, professionalism, and stamina,” he says of his time with Santamaria. “It was one of the greatest experiences of my life, to investigate Latin music from the inside.”

In the midst of his four-year tenure with Billy Harper’s band, he made his recording debut with 1981’s "Stargazer" (Atlas), a trio date with Billy Hart and Eddie Gomez featuring his original compositions.

Through the 1980s, Donelian led a series of outstanding bands, culminating in his quintet with Dick Oatts at the end of the decade, when he feels that his music really came into its own. Donelian has consistently explored his Armenian roots in his music, and recorded for several labels with the Middle Eastern jazz ensemble Night Ark; he also co-produced (with legendary jazz producer George Avakian) "Listen to My Heart," a collection of jazz interpretations of Armenian folk songs.

Donelian has frequently traveled to Armenia to perform, and taught at the Yerevan State Conservatory as a 2002 Fulbright Senior Scholar. An invaluable educator and international clinician, Donelian has written several authoritative texts, including two volumes of "Training the Ear" and the forthcoming "Whole Notes," a new book about piano playing. “Over the years I discovered I had a knack for teaching and later a talent,” he says, “and beyond that a responsibility.”

For additional infos or to order the CD, please visit:
www.armenjazz.com
www.sunnysiderecords.com
Posted by Arnaldo DeSouteiro at 4:28 PM