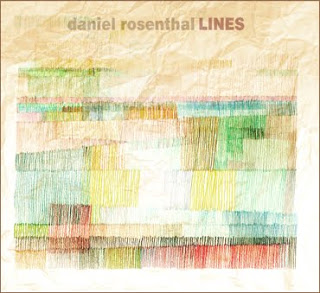 Trumpeter/composer Daniel Rosenthal, a standout with Boston's renowned Either/Orchestra, shines on his first CD as a leader, "Lines," due for September 13 release on his own American Melody label. It's an auspicious debut, offering ten intriguing originals and two engaging Thelonious Monk covers ("Reflections" and "Skippy") dedicated to the memory of his mentor Steve Lacy. Besides Daniel's nine challenging compositions, there's a memorable tune, "Wedding Waltz," by banjo player Wes Corbett, a virtuoso who guests on four tracks, creating a fascinating sonority in combination with Daniel's horns in this piano-less context.

Boston-based trumpeter and composer Daniel Rosenthal is a fresh, imaginative new name on the contemporary acoustic jazz scene. Rosenthal was mentored by legendary soprano saxophonist Steve Lacy while studying at the New England Conservatory of Music, and is the son of acclaimed bluegrass singer/songwriter and string player Phil Rosenthal, who engineered the sessions at his home studio. Daniel is an artist with a unique, engaging vision and is the latest rising jazz star to emerge from the storied ranks of Boston's innovative Either/Orchestra.

The 12 tracks present a wide variety of sounds and styles to the listener, from a trumpet/banjo duet, to a piano-less jazz quartet. From freely improvised trumpet interludes to a harmonically descending calypso, all done with taste and economy. Rosenthal and his partners have been playing together for years, and the chemistry and group interaction is clear for the listener to hear. This music was recorded live with all the players in the same room, and captures the dynamic interplay and warm sound of a live performance.

"I'm definitely influenced by Ornette's writing and his quartet," says Rosenthal, whose pleasingly burnished tone has both warmth and punch. "But I also like to write tunes with chords for this configuration. Without a pianist or guitarist laying down the harmony, you have more freedom even if you're staying within the harmonies."

Rosenthal composed and arranged most of the pieces on "Lines." He clearly shares Coleman's gift for flowing melodic invention. For example, there's "Subo," a slippery calypso that feels like a joyous missive from a Coleman Caribbean holiday. And the aptly chosen title track reveals Rosenthal's love of long, unexpectedly twisting melodies à la Ornette.

The leader's "Eraser" is a through-composed piece that artfully sketches the waning of one relationship and the waxing of another. And major Newgrass banjoist Wes Corbett (of the band Joy Kills Sorrow), who appears on four tracks, contributes the lovely "Wedding Waltz," a piece conceived as a bluegrass ballad that the band effectively recasts here as a lilting jazz vehicle.

"I've been playing in the family bluegrass band since 11," Rosenthal says. "There's something about trumpet and banjo, that metal on metal blend, that's always intrigued me. I thought it sounded really great to have Wes filling out the band's sound. He's not comping so much as laying out the harmonies."

The CD is rounded out by two brief, impromptu trumpet interludes and a pair of Thelonious Monk jazz standards. Steve Lacy taught Rosenthal the beautiful walking-ballad "Reflections" and the challenging "Skippy" by ear, which is how Lacy learned them from Monk.

"Steve talked about playing with Monk a lot," Rosenthal says. "He preferred that we try to learn by ear, and then check out sheet music later if we needed to. He filled in all the harmonies on soprano sax, so it was like playing with a chordal instrument. He really inspired us to go for it on those tunes." 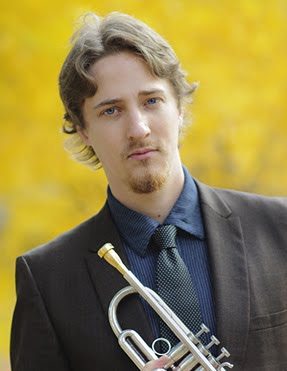 Rosenthal, 29, who was born in Silver Spring, Maryland and raised in Guilford, Connecticut, grew up in a wealth of musical influences, mainly centered around his father's bluegrass (the elder Rosenthal is a former member of the Seldom Scene, a Grammy Award-winning bluegrass band). Jazz came a little later via greats like Louis Armstrong, Duke Ellington, Dizzy Gillespie, Miles Davis, and Don Cherry.

Rosenthal began gigging as a 13-year-old, and during high school traveled to New York City, where he sat in on occasion at the famed Knitting Factory. He studied at the New England Conservatory, where his quartet came together, then joined the Either/Orchestra in 2006. He's an integral part of the group's excellent latest CD, "Mood Music for Time Travellers," praised here on the Jazz Station blog some months ago.

"Playing with Either/Orchestra improved my sense of rhythm," Rosenthal notes. "The compositions that guys bring in have a lot of complex melodies, and that material has given me ideas of how you can blend styles together. Just the idea that everyone doesn't have to have a solo on every song, or a tune doesn't even need any solos, that's all influenced my writing."

When he's not touring with Either/Orchestra or leading his own band, Rosenthal is a dedicated educator who teaches both trumpet and Alexander Technique privately and in two high schools. "The problem-solving aspect of teaching really keeps me fresh and on my toes," he says.

Rosenthal will also perform with the Either/Orchestra 9/8 at the Regattabar in Cambridge, and with the Ayn Inserto Big Band 9/21 at the Berklee Performance Center.

For more details, please check: www.danielrosenthalmusic.com
Posted by Arnaldo DeSouteiro at 8:18 AM