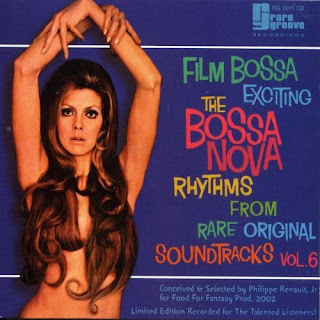 Volume Six in a series of "unofficial" compilations - conceived & selected by Phillipe Renault, Jr. for Food For Fantasy Productions, and released by the PD label Rare Groove always with sexy covers - that focuses on the rare jazz and bossa nova tracks that have inspired and excited fans of Latin, Jazz and Lounge music for ages. These CDs are filled with sounds that are so suave and sexy that you'll need a handkerchief to wipe the sweat off of your brow!

Among the 19 cuts from "Film Bossa" are Hugo Montenegro's "Solo's Samba," Henry Mancini's "I Like The Look," Elvis Presley's "Bossa Nova Baby," Quincy Jones' "Dieter's First Mistake," Lalo Schifrin's "Silvia", the meeting of Francis Lai & Pierre Barouh on "Samba Saravah" (from the "Un Homme et Une Femme" movie) and, as the main attraction, the original recording of Antonio Carlos Jobim's "Dax Rides," a seldom performed instrumental tune from his superb soundtrack for "The Adventurers," recorded in London in late 1969 with arrangements by Eumir Deodato.