WSJ - "The Last Sultan: The Life and Times of Ahmet Ertegun" 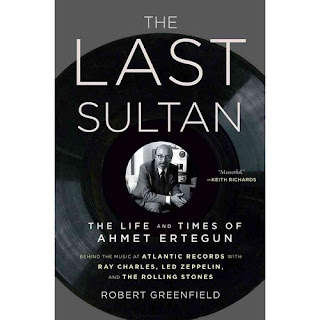 The night he heard Duke Ellington play live, Ahmet Ertegun started down the path that ended in his becoming one of the greatest recording executives in music history. "It was nothing like hearing the records," he said later. "The engineers at the time were afraid that too much bass or too much drums would crack the grooves on the 78s, so they recorded them very low. And when you heard these bands in person, it was explosive.... I'd never heard music with that kind of strength."

Well, not yet, at least, considering he was only 10 years old at the time. The year was 1933; Ellington was playing at the London Palladium, and Ahmet's older brother, Nesuhi, took him to the show. (Their diplomat father was Turkish ambassador to the Court of St. James.) Then again, young or old, Ahmet Ertegun seemed to be out late every night. The genius that led him to sign such artists as Aretha Franklin, Ray Charles, Crosby, Stills, Nash and Young, and the Rolling Stones doesn't seem to be a matter of being in the right place at the right time but of being everywhere all the time. A variation on such phrases as "Ahmet stayed out all night again" or "he changed out of the suit he'd worn to the clubs and went right to the board meeting" occur countless times in Robert Greenfield's almost diary-like account of the glitzy life that Ertegun led before the founder of Atlantic Records died in 2006.

Mr. Greenfield is the author of a number of notable rock biographies, including ones of the rock impresario Bill Graham and the Grateful Dead's Jerry Garcia, as well as the deliciously drug-addled "Exile on Main Street: A Season in Hell With the Rolling Stones," Mr. Greenfield's account of life in Villa Nellcote in the south of France during the summer of 1971, when the band made some of its best music amid excesses that were extravagant even by the Rolling Stones' own debauched standards.

If "The Last Sultan" doesn't titillate as much (it doesn't titillate at all, really), that's because the guys who made the music and the guy who recorded it lived rather different lives. Ertegun drank as much as any other club-goer and bounced a number of women other than his wife, Mica, on his knee, but he never let fun get in the way of business.

Ertegun founded Atlantic Records in 1947 with his friend and fellow jazz and blues lover Herb Abramson, though the major shareholder was the Ertegun family dentist, Vahdi Sabit. On the original three-page contract, the name "Horizon Records, Inc." is crossed out and replaced by "Atlantic Recording Corporation." Ertegun explained: "The name Atlantic was probably about our eightieth choice, because every name we came up with... had already been taken.... It wasn't a name we were crazy about -- it was so generic. There are so many Atlantics, A&P and all that, but finally we said, who cares what we call it?"

The company's first records were not big sellers, largely because the partners had no idea of their potential audience. The discs include a recording of "This Is My Beloved," a book of slightly erotic poetry that was popular with soldiers during World War II but a dud to veterans who had apparently returned to all the romance they could handle. Atlantic recorded Shakespeare's "Romeo and Juliet," thinking "every university would buy at least one copy," in Ertegun's words, but "they were not interested in buying any." The company also tried a set of "trick-track children's records" that allowed a phonograph to randomly select tracks so that a set of four sides could tell 256 different stories, but that tanked, too. (Ertegun and Abramson must not have read kids to sleep at night or they would have known that children like to hear the same story over and over.)

Eventually, Atlantic found its niche with such bluesy pieces as "Drinkin' Wine Spo-Dee-O-Dee" by Stick McGhee, which went to No. 2 on the Juke Box chart in April 1949, and anything by Ruth Brown, who cut nearly 100 sides for the label between 1949 and 1961, making it possible for Atlantic to borrow Yankee Stadium's nickname and become "The House That Ruth Built." Blind Willie McTell was signed, and so was Professor Longhair.

Then, in 1952, Ertegun and Abramson signed their greatest artist ever, a man born Ray Charles Robinson but known to posterity as "The Father of Soul" and "The High Priest" and to millions simply as Ray Charles. Within six months, Atlantic released two songs that would change music forever: Big Joe Turner's "Shake, Rattle and Roll," one of the first rock 'n' roll songs, and Charles's "I Got a Woman," a chart topper that established soul.

The shift in the Atlantic sound was due in part to the arrival of Jerry Wexler, filling the spot left when Herb Abramson, who had completed his dental studies on the government's nickel, was called to serve in the Army Dental Corps in Germany. (Who knew that early rock 'n' roll was so tightly connected with dentistry?) Brilliant and self-educated, Wexler was a cub reporter for Billboard when that magazine decided to change the name of its Race Records chart and Wexler proposed "rhythm and blues." The name stuck, but it wasn't long before Wexler decided that he would rather make records than write about them.

Wexler became the perfect partner for Ahmet Ertegun because the two were so different. Rock duos are notoriously opposed: Lennon was acid to McCartney's honey, and Jagger and Richards don't get along to this day, though they somehow keep making millions together. In Mr. Greenfield's terse summary, Wexler, who died in 2008, was a hipster, and Ertegun was hip. A self-described child of the Depression, Wexler was fearful, angry, liable to fly off the handle at the slightest provocation. Ertegun was born with a sense of entitlement; he had nothing to prove, and, as Mr. Greenfield said, he was "always cool."

Was he ever. Ertegun could play plenty of angles, but his primary occupation was simply being out and about. David Geffen, the record executive and film producer, recalls asking Ertegun how to make money in music only to have the older man stand up and shuffle across the floor. After Mr. Geffen says twice that he doesn't get it, Ertegun finally says: "If you're lucky, you bump into a genius and that makes you rich in the music business!"

No mention is made here of the thousands of non-starters that Ertegun must have encountered in his nightly prowls. His focus was on the geniuses, and once he found them he gave them free rein. Rather than try to shape his artists' work to meet the desires of some perceived audience, as other executives did, Ertegun trusted the instincts of his artists as he trusted his own. The most forceful he may have been was when he advised Mick Jagger to break with the heroin-addicted Marianne Faithfull, but even here he sounds more like a wise uncle than a boss: "I've seen a lot of heartbreak with junkies. Believe me, old friend, it wrecks the lives of everyone around them as well."

It didn't hurt that Ertegun had a commanding presence. As Graham Nash recalls: "This guy could make wallpaper turn around and look at him. Every time he walked into a room, it didn't matter who else was there. Elvis could have been there and everyone would have been looking at Ahmet." To Robert Plant he was "this absolutely elite gentleman, the master of serenity, as much at home with the backstage cavorting of Led Zeppelin as he was with the politesse of high society.... He was, to me, an oasis and a model -- how to be settled in the midst of all this madness, how to know when to get excited and when not."

Mr. Plant also said: "We had some memorable nights together; I wish I could remember them." And that brings up one startling aspect of this book, which is how little it startles. Late in the book, there is a reference to Ertegun's "always unbridled sexual appetites," but in an age of tell-all biographies, this one tells very little. Just before the end, there are a couple of pages on Ertegun's fondness for putting his hands up women's skirts, but his wife says, "I couldn't care less." Apparently Mr. Greenfield figures that if she doesn't care, why should we? Like its subject, "The Last Sultan" is all business.
Posted by Arnaldo DeSouteiro at 5:36 AM