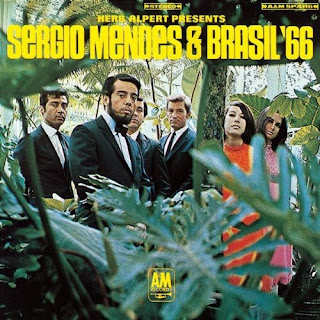 From left to right: percussionist José Soares, pianist/leader Sergio Mendes, drummer João Palma, bassist Bob Matthews, and singers Lani Hall & Bibi Vogel. These are the great musicians and vocalists who recorded, in 1966, the groundbreaking "Herb Alpert Presents Sergio Mendes & Brasil '66" for A&M Records. With the stunning version of Jorge Ben's "Mas Que Nada" as the first single that exploded in the airwaves, peaking at #4 in the "Adult Contemporary Singles" and # 47 in the "Hot 100 Pop" charts of the Billboard magazine, the LP became an instant best-seller and an instant classic, reaching #2 among the "Jazz Albums" and # 7 in the "Pop" chart of Billboard.

Few people are aware of Bibi Vogel (1942-2004) as one of the original singers in the first incarnation of Brasil '66. She wasn't credited in the original vinyl LP cover. Either any of the musicians were mentioned, and all became very upset about it. The gorgeous brunette Bibi Vogel, who also worked in Brazil as a model and an actress, decided to leave the group, and was quickly replaced by the blond Janis Hansen, who did most of the TV shows and toured worldwide, although Vogel performed at the Carnegie Hall concert that opened their coast-to-coast American tour. This explains why all the CD reissues of "Herb Alpert Presents Sergio Mendes & Brasil '66" ignore Vogel and wrongly credit Hansen as the second vocalist. As far as I know, Mendes never talked about it; at least in terms of an official statement. And nobody ever asked him about Vogel either. Regrettable.

Anyway, in spite of all these "politics," the good news is that this legendary album - which, besides "Mas Que Nada," includes great versions of "Going Out of My Head," "Day Tripper," "O Pato" and "Slow Hot Wind" - has just been inducted to the Grammy Hall of Fame.

SANTA MONICA, Calif., Nov. 21, 2011 -- Continuing the tradition of preserving and celebrating great recordings, the Recording Academy announces the newest additions to its legendary Grammy Hall of Fame collection. Highlighting diversity and musical excellence, the collection acknowledges both singles and album recordings of all genres at least 25 years old that exhibit qualitative or historical significance. Through a tradition established nearly 40 years ago, recordings are reviewed annually by a special member committee comprising of eminent and knowledgeable professionals from all branches of the recording arts, with final approval by the Recording Academy's National Board of Trustees. With 25 new titles, the list currently totals 906 and is displayed at the Grammy Museum.

"The Recording Academy is dedicated to celebrating a wide variety of great music and sound through the decades," said Neil Portnow, President/CEO of the Recording Academy. "We are especially honored to welcome this year's selection of some of the most influential recordings of the last century. Marked by both cultural and historical significance, these works truly have influenced and inspired audiences for generations, and we are thrilled to induct them into our growing catalog of outstanding recordings."

Representing a great variety of tracks and albums, the 2012 Grammy Hall of Fame inductees range from Bruce Springsteen's "Born in the U.S.A." album to civil rights activist Dr. Martin Luther King Jr.'s "I Have A Dream" speech from his historic 1963 address at the March on Washington. Also on the highly regarded list are Cole Porter's "Anything Goes," the Rolling Stones' album "Exile on Main St.," Gloria Gaynor's "I Will Survive," Grandmaster Flash and the Furious Five's single "The Message," Bill Cosby's comedy album "I Started Out as a Child," the original Broadway cast recording of "St. Louis Woman," Tina Turner's "What's Love Got to Do With It" and "Herb Alpert Presents Sergio Mendes & Brasil '66." Others inductees include the entire Anthology of American Folk Music, Gene Autry, Crosby, Stills, Nash and Young, Doris Day, the Serge Koussevitzky-conducted Boston Symphony Orchestra, Los Panchos, Santana, and Paul Simon, among others.

I STARTED OUT AS A CHILD
Bill Cosby
Warner Bros. (1964)
Comedy (Album)

QUE SERA, SERA (WHATEVER WILL BE, WILL BE)
Doris Day
(Jay Livingston and Ray Evans)
Columbia (1956)
Pop (Single)

For a list of previous Hall of Fame selections: http://www.grammy.org/recording-academy/awards/hall-of-fame

Thank you for that explanation. I was trying hard to figure out if the photo on the album cover was Vogel or Hansen.