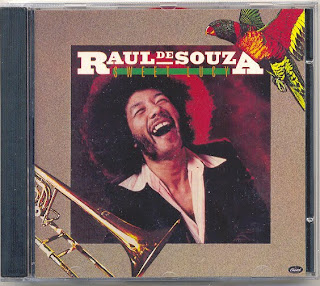 Two cult albums recorded in LA in the late '70s, for Capitol Records, by Brazil's top trombonist ever, Raul de Souza, will be reissued on CD in Japan next December 21. Both were produced by George Duke and engineered by Kerry McNabb at Paramount Studios in Los Angeles, having reached the Billboard jazz charts.

"Sweet Lucy" (1977) was Raul's groundbreaking debut fusion album for Capitol, after the overlooked jazz masterpiece "Colors" (produced by Airto Moreira in 1974 with such guests as Cannonball Adderley, J.J. Johnson, Jack DeJohnette & Richard Davis, and released in 1975 on the Milestone label), which was produced by Arnaldo DeSouteiro for CD reissue in 1999 as part of Fantasy's Original Jazz Classics series; btw, DeSouteiro also produced, in 2001, for BMG, the first CD reissue ever of Raul's debut album as a leader in Brazil, "À Vontade Mesmo" (RCA, 1965). The first digital release of "Sweet Lucy" came out in Germany, on the EMI Electrola label back in the 90s, but soon was sold-out and, oddly, was never re-printed, becoming one of the most expensive out-of-print CDs in jazz history. 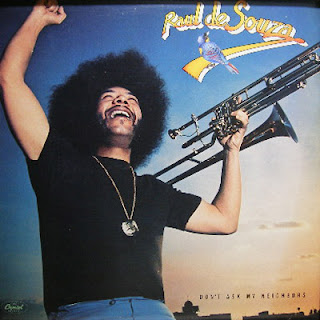 "Don't Ask My Neighbors," which is being reissued on CD for the very first time, originally came out in 1978 and also sold very well, peaking at #26 in the Billboard Jazz Charts. Its main single, George Duke's penned "Daisy Mae," was the only track (from that album) included in some CD compilations released in Europe during the 90s, after having reached the status of a dancefloor classic during the acid-jazz heyday. The program includes the delightful title track on which Raul showcases his creative phrasing skills on the tenor-bass trombone, Harvey Mason's "La La Song" (the first time ever he used the Souzabone on a recording!), a wildly brilliant arrangement - by Raul himself - of Wayne Shorter's "Beauty and the Beast" (originally heard on the "Native Dancer" LP), nice covers of Michel Colombier's "Overture" and Michael Henderson's "At The Concert," plus two compositions by our trombone hero: "Jump Street" and "Fortune," the latter co-written with Marilyn Castles, his American wife at that time.

Once again, Raul performs with an all-star cast: Harvey Mason, Ndugu, Azar Lawrence, Manolo Badrena, Airto, Byron Miller, Robert "Pops" Popwell, and two great guitarists from the '70s jazz scene that later disappeared: Roland Bautista (who performed at the Rio/Monterey Jazz Festival in Rio de Janeiro, back in 1980, in an all-star group with Raul de Souza, George Duke, Stanley Clarke, Ndugu and Airto) and Charles "Icarus" Johnson (who played with Duke's superband, alongside Sheila Escovedo, at the first São Paulo/Montreux Jazz Fest in São Paulo in 1978, and also recorded on Airto's "I'm Fine. How Are You" album for Warner.) Raul's third and final album for Capitol, "'Til Tomorrow Comes," a controversial disco session, remains unreleased on CD format, but shall be released in 2012. 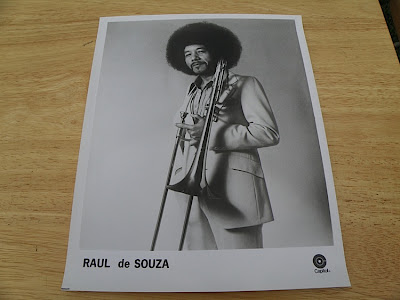 Above, the promo pic from Raul de Souza's press kit distributed at the time of the original release of "Sweet Lucy." Below, a photo taken at the backstage of Roxy Theater in LA, after the release concert of "Don't Ask My Neighbors." Raul plays his Souzabone watched by members of Capitol Records' staff. 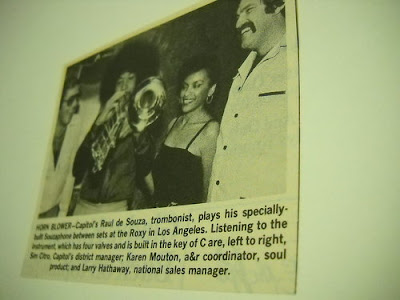 Tomorrow night, November 23, Raul de Souza will be taping his first official DVD during a concert at the SESC Vila Mariana Theater in São Paulo, with such special guests as Altamiro Carrilho, João Donato and Hector Costita. In 2006, Raul's concert with the Jazz Sinfônica Orchestra @ Sergio Cardoso Theater was filmed for a DVD release that never happened due to the legal issues. There's also a haunting short-film documentary titled "Viva Volta," exhibited in some movie festivals in 2005 but never commercially released. It was directed by Heloisa Passos, with screenplay by Daniela Capelato & Malu Tavares.
Posted by Arnaldo DeSouteiro at 4:42 AM