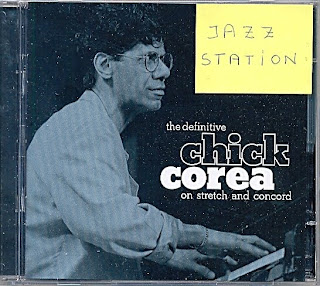 This 2-CD set, 21-track collection covering Chick Corea's recordings over 30 years (from 1980 to 2009), offers a dazzling array of settings and styles, originals and standards. The title refers to his projects released on his own Stretch label and, later on, for Concord. However, some of those albums ("Tap Step," "Three Quartets" and "Touchstone") were originally recorded for Warner Bros. in the early 80s, soon after his contract with Polydor expired and he signed with Warner. A decade later, when Chick felt that Warner had no interest on that material, he wisely made a proposal to buy the rights and reissue the WB albums on his own Stretch label. This is not mentioned on the liner notes, though. Btw, a "definitive Chick Corea on Polydor" was produced by Arnaldo DeSouteiro for Verve's Jazz Club series in 2008 under the title "Electric Chick," covering great tracks from the Polydor years (1976-1979) that yielded such albums as "Friends" and "The Leprechaun," "My Spanish Heart," "Secret Agent" and "The Mad Hatter," most of them Grammy winners.

Well, back to the Stretch/Concord CD. Highlights: the title track from the overlooked 1980 album "Tap Step," featuring great solos by Joe Farrell (tenor sax), Al Vizzutti (trumpet) & Corea (Fender Rhodes, MiniMoog), with Benny Brunel sounding as creative as Jaco Pastorius on the fretless bass and another underrated giant, drummer Tom Brechtlein, doing a marching band as good as Steve Gadd; "Quartet No.1" from the impeccable "Three Quartets" album with Michael Brecker (tenor sax), Eddie Gomez (acoustic bass) & Steve Gadd (drums); the lyrical piece "Duende" with Lee Konitz on alto sax backed by a string trio; a nice version of "Windows," one of Corea's early classics, revisited in 1997 by Pat Metheny (electric guitar), Gary Burton (vibes), Dave Holland (bass) & Roy Haynes (drums); piano solo renditions of "Spain" and "It Could Happen To You"; the fusion of Spanish and Brazilian elements on "North Africa," with Airto Moreira on shaker & bells spicing Vinnie Colaiuta's heavy drumwork; a 14-minute orchestral arrangement of "Crystal Silence" recorded live in Australia, in 2007, with Burton & the Sidney Symphony Orchestra; the meeting with John McLaughlin on "The Disguise" from the recent "Five Peace Band Live": and a previously unissued live version of "La Fiesta" cut in a trio setting with Stanley Clarke (acoustic bass) & Lenny White (drums) at the Jazz Alley club in Seattle.