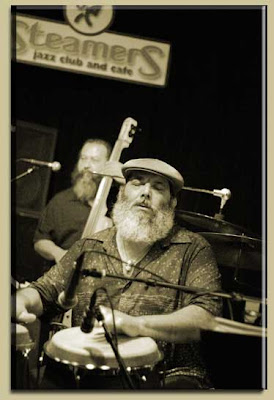 If music were about pictures, percussionist Poncho Sanchez's music would best be described as a kaleidoscopic swirl of some of the hottest colors and brightest lights to emerge from either side of the border. At any given show, on any given record, fragments of Latin jazz, swing, bebop, salsa and other infectious grooves collide and churn in a fiery swirl, with results that are no less than dazzling. All of these sounds and more come together in "Psychedelic Blues," Sanchez's twenty-fourth recording on Concord Records. "The last couple records have gone a little heavy on the soul music, which has gone over really well in our live shows, but we wanted to do more of a straightahead Latin jazz record this time - something in the tradition of our earlier Concord records that we made back in the '80s."

Sanchez remained with Cal Tjader until the bandleader's death in 1982. That same year, he signed with Concord for the release of "Sonando!," an album that marked the beginning of a prolific musical partnership that has spanned more than 25 years and has yielded two dozen recordings.Whether it's salsa, straightahead jazz, Latin jazz, or even elements of soul and blues, the mesmerizing array of sounds and colors from Poncho Sanchez's youth have telegraphed across the decades and continue to inform his creative sensibilities to this day. "There's room for a lot of different sounds in our music," he says. "I think people have come to know that that's what Poncho Sanchez is all about. We put it all together in a pot, boil it together and come out with a big stew. This isn't some marketing strategy to sell records. These are the sounds I grew up with. So when I play this music, I'm not telling a lie. I'm telling my story. This is the real thing."
Posted by Arnaldo DeSouteiro at 5:37 AM