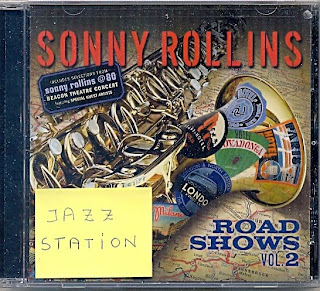 This is the disc that will be voted Best Album of the Year in both the DownBeat Critics and Readers Polls in 2012. And will be nominated for a Grammy in 2013. Here at Jazz Station, it will be voted one of the Best 10 Jazz Albums of 2011. More: for a single track, "In A Sentimental Mood," on which Rollins surprisingly doesn't performs, Jim Hall deserves to be honored as Best Jazz Guitarist of the Year. "Road Shows Vol. 2" also features great contributions by Roy Haynes, Roy Hargrove (arguably in his best live performance ever documented on tape), harmolodic-free jazz iconoclastic master Ornette Coleman, Russell Malone (who toured Europe in 2009 and 2010 as a member of the CTI All Stars superband, having recorded the DVDs "2009 Montreux Live" and "Live at Burghausen"), Christian McBride, Bob Cranshaw, Kobie Watkins (improving & sounding better each day) and Sammy Figueroa, one of my all-time favorite conga players since his sessions with Deodato, Michel Camilo and Average White Band, among so many others.

"Road Shows, Vol. 2" is quite likely to revive the delirious excitement stirred up at the saxophonist's sold-out 80th-birthday concert held in New York's Beacon Theater on September 10, 2010. Four tracks on the new CD -- released in the U.S. on Sonny's own Doxy label under exclusive license to Universal International Music B.V. -- were recorded that night; one of them is the 20-minute "Sonnymoon for Two" on which Rollins and surprise guest Ornette Coleman performed together in public for the first time in their long acquaintance, with electrifying results. "This material was not intended to be my next album," says Rollins, "but it was so strong that I felt I had to release it."

But two other tracks (the opener and the closener) were cut during a Japanese tour, also in 2010. The marvelous 14-minute take on Irving Berlin's "They Say It's Wonderful" (the best version of this song since Tony Bennett's rendition on his "Bennett/Berlin" album) comes from a concert at the Sapporo Shimin Hall, on October 1, 2010, while a short revision of Rollins' most famous calypso, "St. Thomas," was selected from a performance for a 5,000 people audience at the Tokyo International Forum, six days later. The engineers were able to mix and edit all six tracks in a way that they seem to come from a single concert, though, using the applauses to unify the tracks. The sound quality is very good, except for the noise (tape hiss? a problem with the guitar amplifier?) during the moments that Jim Hall plays superbly without the rhythm section on "In A Sentimental Mood."

The historic onstage meeting of Rollins and Coleman, whom CD annotator Francis Davis describes as "the two sharpest minds in jazz," was a first, though the saxophonists are friends who used to practice together on the beach in California. "Coleman was invited to play at the Beacon concert, says Rollins, "but I didn't know until the last minute whether he would accept the invitation." Indeed, his participation was confirmed just a few hours before showtime. 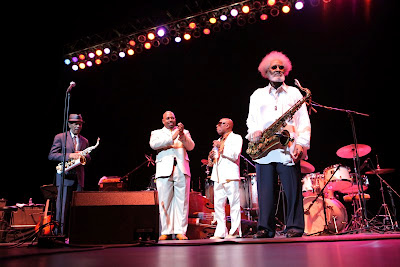 "I figured that 'Sonnymoon' would be open enough for Ornette and for everybody," says Rollins. "It could be played in a structured way or an unstructured way. It was malleable enough to suit whatever my guests wanted to do with it."

"Road Shows, Vol. 1" was one of the most highly-praised albums of 2008, placing at the top of many best-of lists and critics polls. Stereophile, in a five-star review, wrote that it "represents a new entry on the short list of albums that every serious jazz fan needs to own." It was also elected Jazz Album of the Year in both the 2009 DownBeat Critics & Readers Polls, making Rollins a tripple crown winner in the Readers Poll (he also topped the Tenor Sax and Jazz Artist categories) and a double winner according the Critics (Jazz Album and Jazz Artist, placing second as Tenor Sax, behind only Joe Lovano.) Plus: even without a new release last year, Rollins also won the 2010 DownBeat Readers Poll in the Tenor Sax category.

Referring to the three-year gap between the two "Road Shows" CDs, the saxophonist comments that "it is my intention and desire to release more music in a much shorter span of time. I have a lot in the archives, but I am thinking about recent things. I want to capture some of Sonny Rollins 2011 -- new material that I have, and new ideas that I have and am working on, which are as yet unfulfilled and undocumented. Working in the studio is a definite possibility."

Rollins, whose most recent honor is the National Medal of Arts, which was presented to him by President Barack Obama in March, is currently on tour in Australia and New Zealand. He recently returned to the New Orleans Jazz & Heritage Festival for the first time since the mid-1990s, premiering a much-talked-about composition called "D. Cherry." Shortly after the release of "Road Shows, Vol. 2" (manufactured & marketed by Decca, and distributed by Universal Music Distribution, with the Doxy and Emarcy logos printed in the back cover), Rollins performed several concerts in California, including the Monterey Jazz Festival, as well as in Washington, DC and Nashville, before embarking on a fall European tour. The Titan remains a G-Man, a Saxophone Colossus. God keeps Blessing Him! 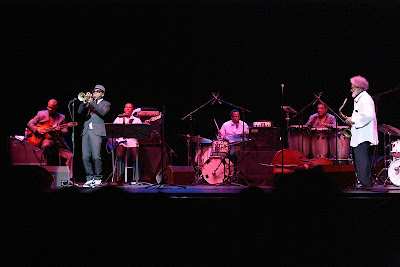