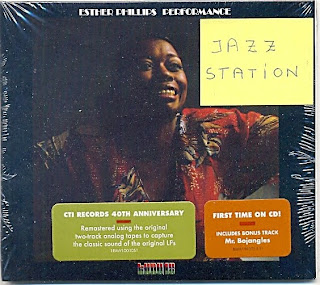 While often compared to Nina Simone, Esther Phillips’ idiosyncratic vocal style and her ability to sing in a wide range of styles from blues and jazz to straight-up pop and disco, established her as a unique talent. The inventive arrangements heard on "Performance" -- previously reissued on CD only in Japan when included in the "I Love Kudu" series supervised by Arnaldo DeSouteiro in 2007 -- feature a backup band consisting of a veritable who’s who of ‘70s jazz artists including keyboardists Bob James & Richard Tee, electric bassist Gary King, flutist supreme Hubert Laws, tenor sax giant Michael Brecker, ace drummers Bernard Purdie & Steve Gadd, and unobstrusive percussionist Ralph MacDonald.

Edgier than some of her other CTI/Kudu releases, "Performance" shows Phillips at her most soulful and at the peak of her vocal powers. Available for the first time on CD in the USA, "Performance" includes, as a bonus track, “Mr. Bojangles” (previously released only on a CD compilation produced by Didier Deutsch for Epic in 1990, "The Best of Esther Phillips.")

"Performance," cut in May 1974 and mostly arranged-conducted by Alfred "Pee Wee" Ellis, was the fourth of seven Esther Phillips' projects recorded for Kudu between 1971 and 1977. [During that period, the best and most successful time of her career, she also toured often with the CTI All Stars, as documented on the official albums "CTI Summer Jazz at the Hollywood Bowl" and such bootlegs as "CTI at the Olympics - Live in Munich."] In the 90s, Esther's highly distinctive reading of Gene McDaniels' "Disposable Society" (the only track arranged by the extremely underrated bassist Gary King) became a dancefloor hit in the acid-jazz scene, with the help of Michael Brecker's screams, Bob James' unmistakable Fender Rhodes touch and, mainly, Steve Gadd's breakbeats.

Btw, the arrangers (Ellis, King and Don Sebesky) are uncredited on this CD reissue, due to a mistake of the uncredited (ir)responsible for adapting the original LP artwork to CD format. Btw 2: oddly, all these Kudu albums, originally released in single-pocket sleeves, now reappear on CD in gatefold covers! The liner cover includes the lyrics of seven of the eight songs (they forgot to include "Mr. Bojangles") 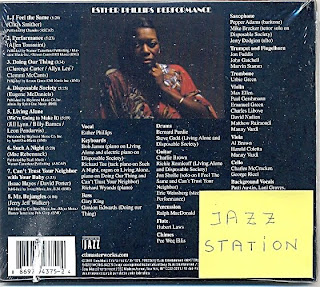 Posted by Arnaldo DeSouteiro at 6:32 AM

Due to technical problems too long to explain here, I moved my blog to a different host.
My new address :

Thank you again for your valued support and your wonderful articles.

Thank you Arnaldo for taking some of your precious time to update the URL of my blog.

Cher Alain,
My pleasure. Btw, I visited your blog yesterday. Great comments on Esther Phillips' "From A Whisper To A Scream" and Art Farmer/Jim Hall's "Big Blues." When you have the chance try to get a copy of Art Farmer's "Live in Tokyo," it's fantastic!
All the Best, a bientot,
Arnaldo