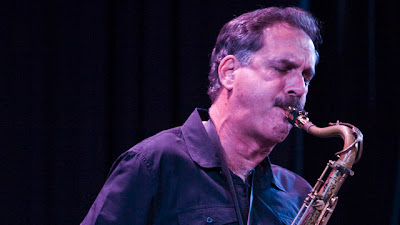 The Monterey Jazz Festival, a leader in jazz education since its inception in 1958, announced yesterday that saxophonist, jazz educator, and director Paul Contos has been named as the Festival’s Director of Education.

A San Francisco Bay Area native, Paul Contos has been an essential part of the Monterey Jazz Festival's Jazz Education Programs since their inception in 1984, and is active as a saxophone clinician, educator, and performer at various educational festivals, clinics, concerts, and workshops in the United States, Japan, Europe, Canada, and Brazil.

His work for the Monterey Jazz Festival’s Traveling Clinician’s Program, Next Generation Jazz Orchestra (co-director from 1991-2002, and director since 2003) and the Monterey County High School All-Star Band is distinguished. As his guiding concept, Contos is constantly working to provide inspiration and motivation to the world’s young generation of new jazz artists for the continuation, persistence, and relentless development and evolution of the jazz language.

“I am extremely excited to be working with Paul in an expanded capacity in his new role as Education Director,” said Tim Jackson, Artistic Director of the Monterey Jazz Festival. “Paul has been involved with the Monterey Jazz Festival for close to 30 years and has a clear sense of mission and purpose and a boundless passion for jazz and education. He is a leader in jazz education and I look forward to participating in his vision for our education programs.”

Since the 1970s, Contos has been involved in jazz performance and education in the San Francisco Bay Area and internationally. He is a faculty member at UC Santa Cruz, has taught at Monterey Peninsula College, and developed the curriculum and pedagogy for the Music Recording/Technology Concentration at Cal State University, Monterey Bay. He has received three performer grants from the National Endowment for the Arts, as well as serving as a three-year term as Artist-In-Residence for the California Arts Council.

In 2009, Contos was featured as saxophone soloist at Carnegie Hall as part of New York City’s Distinguished Concerts International, performing a jazz concerto by composer Jeff Beal. Later that year, he was appointed as the Director of the SFJAZZ High School All-Stars.

The Monterey Jazz Festival celebrates the legacy of jazz and expands the boundaries of and opportunities to experience jazz through the creative production of performances and educational programs. The Festival recently completed its 54th edition with 38,000 fans visiting the Monterey County Fairgrounds, September 16 – 18. The 2012 Monterey Jazz Festival will take place September 21 - 23, 2012.
Posted by Arnaldo DeSouteiro at 6:21 AM