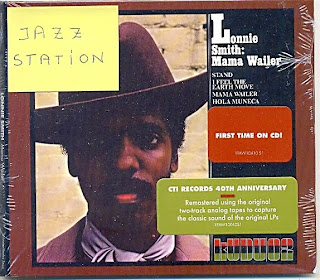 Some years ago, Arnaldo DeSouteiro had the honor to supervise the 2001 and 2007 Japanese CD reissues of Lonnie Smith's "Mama Wailer," now finally released here in the USA. At my invitation, CTI's top historian Doug Payne provided a fantastic set of liner notes (for the Japanese reissues), which can be found here: http://www.dougpayne.com/kunotes2.htm

"If Lonnie Smith considers himself “the doctor of groove,” then Mama Wailer is certainly his doctoral thesis. This 1971 record was only the second of Creed Taylor’s Kudu productions and, surprisingly, the only Kudu or CTI session Lonnie Smith ever participated in. But the record has become a jazz-funk classic; one of the rarest of rare grooves and still highly sought after by young dancers and DJs alike," Payne stated. "All in all, it’s a superb collection of long, exploratory ideas on the nature of groove and the real “turning point” in Lonnie Smith’s musical thinking."

“The doctor of groove,” as Lonnie Smith refers to himself, is most definitely in session on Mama Wailer, Smith’s only CTI release. While known as a master of the Hammond B-3 organ, the title track features Smith on clavinet. A distinct departure from the fat sound of the B-3, Smith manages to make this electronic keyboard lay down a strong feeling of urban funk. Half of the album is made up of original compositions – the title track and “Hola Muneca” – the other half covers tracks popular from the time of the recording sessions - Carole King’s “You’ve Got a Friend” and Sly and The Family Stone’s “Stand.”
Posted by Arnaldo DeSouteiro at 4:16 AM