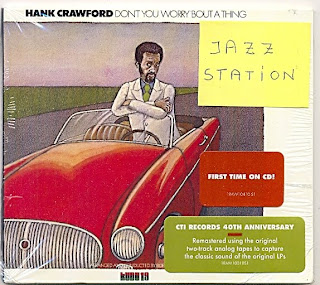 Sony Masterworks Jazz decided to conclude the celebration series of the 40th Anniversary of Creed Taylor's CTI Records with the release of four albums from CTI's subsidiary label Kudu: Hank Crawford's "Don't You Worry 'Bout A Thing" (on its first CD reissue ever anywhere in the world!) and three other titles previously reissued on CD only in Japan: Esther Phillips' "Performance," Johnny Hammond's "Wild Horses Rock Steady" and Lonnie Smith's "Mama Wailer." Each 40th Anniversary Edition is packaged in a soft-pack sleeve that replicates the iconic cover design.

All albums were produced by Creed Taylor & engineered by Rudy Van Gelder at his legendary Van Gelder Studios in Englewood (New Jersey), with artwork by Bob Ciano featuring cover pics by such photographers as Alen MacWeeney, William Cadge & Duane Michals, with Pierre Le-Tan signing the painting used on Crawford's item.

Recorded in June 1974 as the fourth of eight albums that alto sax master Hank Crawford would record as a leader for Kudu between 1971 and 1978, "Don't You Worry Bout A Thing" represented his third & last studio association with Bob James, who had provided all the arrangements for the previous "Wildflower" (1973) as well as some basic charts for "We Got A Good Thing Going" (1972), to which Don Sebesky had added string arrangements.

“With an unmistakable blues wail, full of emotion and poignancy, altoist Hank Crawford bridges the gap between that tradition and that of jazz more completely than any other living horn player,” writes the renowned fusion historian Thom Jurek in All Music Guide (Crawford passed away in 2009). Taking its title from Stevie Wonder’s timeless hit, "Don’t You Worry ‘Bout A Thing" features artists emerging from their years as straight-ahead jazz practitioners. Hank Crawford and crew create their own special mix of funk and soul and apply it to popular hits as well as original compositions with a jazz fusion bent. Now, "Don’t You Worry ‘Bout A Thing" becomes available on CD for the first time in this planet.

Crawford's "Wildflower" had included a delighful take on Stevie Wonder's "You've Got It Bad Girl" which received a lot of radio airplay. This explains why Creed Taylor suggested Hank and Bob James to work on new scores for two other tracks by Stevie, both from the groundbreaking "Innervisions" LP for Motown. One of those songs, the latin-tinged "Don't You Worry Bout A Thing" received a frenetic funky arrangement by Bob James, who also took care of the Fender Rhodes electric piano, the Hohner clavinet and the Arp Pro Soloist synth, with Gary King on electric bass and Bernard Purdie on drums. With no latin tinge. The second Wonder tune was his classic ballad "All In Love Is Fair," but played with an unpreditcable up-tempo r&b punch.

Crawford provided three originals: "Jana" (a lush ballad), the 12-minute funky jam "Sho Is Funky" (co-written with Bob James) and the short straight-ahead tune "Groove Junction," the only track with Ron Carter on bass. All subsequent Kudu albums by Crawford were done in collaboration with arranger David Matthews, who would replace James and Sebesky as CTI's in-house maestro after the mid 70s. So, "Don't You Worry..." was the swan song of the Crawford/James association in the studios, although they kept playing together in several CTI All Stars concerts. 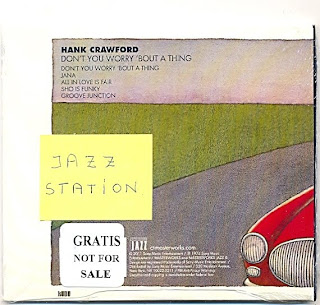 Posted by Arnaldo DeSouteiro at 6:31 AM