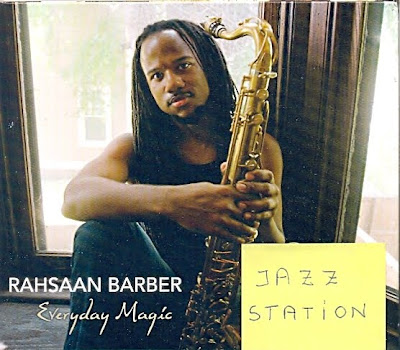 An impassioned sax player & a great composer, Barber leads his new ensemble through the nine amazing tracks of "Everyday Magic," his second solo project. There's an astonishing variety of material, moods & directions, but the "focus" is always there. After the frenetic opener, "Jubilee" and the "Lost and Found" theme that serves as an elegant intro to track #3, electric guitarist Adam Agati steals the show with splendid rock-ish solos on "Floodsong" and the haunting gospel-ballad "Manhattan Grace." The next goose bumps come with the appearance of trombonist Roland Barber, soloing superbly (mixing influences of J.J. Johnson, Roswell Rudd and Ray Anderson) on the in-the-pocket mid-tempo of "Why So Blue?" (unexpectedly using the plunge with great effect during the conversation with Rahsaan's vigorous tenor in the tag) as well as on "Memphis Soul," a funky-latin number that reminds me of Raul de Souza's collaborations with Cannonball Adderley ("Colors") and Sonny Rollins ("Nucleus") in the '70s. On this latter track, percussionist Giovanni Rodriguez adds an extra rhythmic spice, and Agati uses pedal effects with creativity.

The leader moves to the flute on the introspective "Adagio" (Agati's backing functions as an organ, confirming that this guy is a creative monster, while drummer Jackson uses mallets) and to the soprano sax on "Innocence," on which Agati sounds like a mix of John Scofield and Pat Metheny - please take it as a compliment - and pianist Jody Nardone also stands out, propelled by the energetic approach of drummer Nioshi Jackson & acoustic bassist Jerry Navarro. A highly impressive CD guided by Rahsaan Barber's fascinating multiple talents. And that's my vision of real "contemporary jazz." Amen.
********
The dynamic saxophonist and flutist Barber has emerged as a musical force in his hometown of Nashville, and now he's reaching for a wider audience with his terrific new CD, "Everyday Magic." The album debuts his powerhouse band, also called Everyday Magic. Besides Barber on tenor, alto, and soprano saxophones and flute, the ensemble is comprised of four top Nashville musicians: Adam Agati, Jody Nardone, Jerry Navarro & Nioshi Jackson. Trombonist Roland Barber, Rahsaan's twin brother, is a guest on two tracks, as is percussionist Giovanni Rodriguez (co-leader, with Rahsaan, of the Latin-jazz septet El Movimiento).

"When I tell my New York friends there are all these fantastic jazz musicians in Nashville, they say, come on, really?" says the 31-year-old saxophonist, active in the Music City's scene as a performer, studio musician, and educator. "I'm really hoping to help bring more attention to them."

"Everyday Magic" is a formidable outing for the versatile artist and his ambitious label. Barber reveals his substantial tenor saxophone chops on the uptempo groover, "Jubilee"; the sweet, gospel-tinged love song, "Manhattan Grace," displays yet another aspect of the leader's expansive compositional bent, and spotlights his warm alto saxophone style. "Adagio" is a showcase for Barber's flute sensibilities, and "Innocence," a deftly constructed, appealing waltz, allows his soprano saxophone to shine.

Rahsaan Barber and his brother Roland -- named after famed jazz reed artist and composer Rahsaan Roland Kirk -- were born in Nashville on April 2, 1980 into a musical family that includes another brother, saxophonist Robert; their mother, a singer; and their grandmother, a pianist.

As a youth Rahsaan heard a variety of music from gospel and country to blues and jazz, and his exposure greatly expanded when he went to Indiana University to study music under the esteemed educator David Baker. "His model of work ethic, passion for music, detailed and patient educational offerings and soulfulness have continued to show their influence in my own approach to music," says Barber.

The Barber Brothers debuted on record with "Twinnovation," in 2001, and Rahsaan's first album under his own name was 2005's "TrioSoul," featuring B-3 organist Moe Denham and drummer Robert Bond. Last year came "The Movement" by El Movimiento, which Rahsaan co-leads with percussionist Giovanni Rodriguez and trumpeter Imer Santiago.

The saxophonist, who has taught at Nashville's Belmont University, is among the many distinguished artists who have played with the Nashville Jazz Orchestra; he's also performed at the community-based Nashville Jazz Workshop. "There are so many different strands of music here in Nashville," said Barber. "There's a unique opportunity here to build a sound."
Posted by Arnaldo DeSouteiro at 2:41 PM