The Chip White Ensemble returns to Gillespie Auditorium, in NYC, next Tuesday 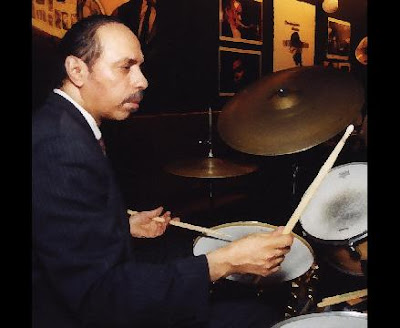 On Tuesday November 8, the Chip White Ensemble will be playing in the John Birks Gillespie Auditorium at the New York City Baha'i Center, 53 East 11th Street (between University Place and Broadway). Sets are at 8 and 9:30 PM, and your can buy tickets at the door or reserve them by calling 212-222-5159.

As always, you can find out more about Chip's gigs, music, poetry, and recordings on www.chipwhitejazz.com, and you can purchase Chip's CDs at the gig or online from CDBaby at www.cdbaby.com/artist/chipwhite

The John Birks Gillespie Auditorium is located in the heart of Greenwich Village within the Baha'i Center:
53 E. 11th St. (Between B'way and University Place)
New York, NY 10003

Chip White was born on December 21, 1946 in New York City. He began studying percussion and music with his father at the age of nine, and studied theory and harmony with Vincent Corzine while in high school. Chip then continued his formal education at Ithaca College and later at the Berklee School of Music in Boston, MA, where he studied with Alan Dawson, Charlie Marino, and Herb Pomeroy. He also studied privately with Freddie Buda of the Boston Symphony. Later, he studied orchestration and arranging with Frank Foster.

In the past several years, years, Mr. White has appeared on Houston Person’s albums "In a Sentimental Mood," "Social Call," and "To Etta With Love"; Etta Jones’ "Easy Living" and the Grammy-nominated "Etta Jones Sings Lady Day"; and Teddy Edwards’ "Ladies Man" and "Smooth Sailing," all on the High Note record label. His composition “Time Stood Still” is featured on Houston Person’s "All Soul."

Chip recently reinvigorated the Chip White Ensemble with gigs at Dizzy’s Coca Cola/Jazz at Lincoln Center, Sweet Rhythm, and the Lenox Lounge in New York City, Cecil’s in Orange, NJ, and the John Birks Gillespie Auditorium at the Bahá’í Center in New York City. Chip has also written a book of poems about jazz musicians entitled "I’m Just the Drummer in the Band."

In 2008, Chip released "Double Dedication," a two-disc set. Disc 1 includes his original compositions written for famous jazz masters such as Lester Young, Duke Ellington, Charlie Parker, Dizzy Gillespie, and Billy Strayhorn – thirteen in all. The musicians are Steve Wilson, Randy Brecker, Wycliffe Gordon, Kenny Barron, Ray Drummond, Gail Allen, and Chip. On, the second, shorter disc, Chip reads poems from I’m Just the Drummer in the Band for each of the thirteen musicians, in the same order as the compositions on the first disc, with the music sequenced underneath. This unique and exciting recording was on the JazzWeek Jazz Album radio charts for six weeks, reaching number 27.