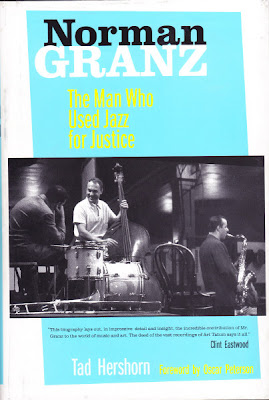 According to Percy Bysshe Shelley, poets -- and, by extension, artists of all kinds -- are "the unacknowledged legislators of the world." Yet the people who make it possible for artists to make art typically get even less acknowledgment. Agents, managers, editors, patrons, producers, art dealers, even the odd critic: All play pivotal roles in the creation and dissemination of art, but few are known by name save to insiders, and fewer still receive the posthumous credit that they deserve. Yes, Joe Orton's emergence as a major playwright was one of the great theatrical success stories of the 1960s -- but the author of "What the Butler Saw" might never have gotten anywhere if Peggy Ramsay, Orton's agent, hadn't taken him on. Yes, Jasper Johns is now universally acknowledged as a key figure in the history of postwar American art -- but it was Leo Castelli's decision to show Mr. Johns's work at his gallery in 1958 that set the painter on the path to fame.

Nowadays the name of Norman Granz, who died in 2001, is known only to gray-headed jazz buffs, but there's a fair chance that you own at least one of the hundreds of albums that he produced for Verve, the record label that he founded in 1956. The "songbook" albums in which Ella Fitzgerald recorded her interpretations of the collected works of such classic songwriters as Harold Arlen, George Gershwin and Johnny Mercer were Granz's idea. So were the 14 albums taped at a series of marathon sessions in 1954 and 1955 in which Art Tatum, the greatest of all jazz pianists, recorded 120 stupendously virtuosic solo performances -- nearly the whole of his working repertoire. So was Jazz at the Philharmonic, the now-legendary series of concert tours in which Granz brought together such illustrious artists as Fitzgerald, Duke Ellington, Stan Getz, Coleman Hawkins, Charlie Parker, Oscar Peterson, Buddy Rich and Lester Young.

Granz is now the subject of a much-needed biography by Tad Hershorn called "Norman Granz: The Man Who Used Jazz for Justice" (University of California Press). The title may sound a bit sober-sided, but it serves as a useful reminder of what Granz thought to be his most important achievement: A passionate opponent of racial segregation, he insisted as early as the '40s that all Jazz at the Philharmonic concerts be open to mixed-race audiences, and he went well out of his way to ensure that the many musicians who worked for him, be they black or white, were generously paid and properly treated wherever they went, even in the Deep South. "I insisted that my musicians were to be treated with the same respect as Leonard Bernstein or Jascha Heifetz because they were just as good, both as men and musicians," Granz said.

He wasn't kidding. All Jazz at the Philharmonic contracts contained ironclad antisegregation clauses, and Granz would cancel a show whenever those clauses were violated, no matter what it cost him at the box office. Moreover, he was equally respectful of his artists in the recording studio. A hands-off producer, he believed in letting the musicians whom he admired play whatever they wanted to play, and his concert tours were so lucrative that he was able to release albums that had no chance of turning a profit, simply because he thought that the music on them deserved to be heard.

Though Granz goes unmentioned in the standard histories of the civil-rights movement, his contribution to the cause of racial justice in America was considerable. That said, it seems likely that he will be remembered longest for his work as a record producer. It's extraordinary in retrospect how many of the albums he released on Clef, Norgran, Pablo and Verve, the four jazz labels he ran at various times between 1947 and 1987, have proved to be of permanent interest. "The Art Tatum-Ben Webster Quartet," "The Astaire Story," "Count Basie Swings, Joe Williams Sings," "Ella and Louis," "The Oscar Peterson Trio at the Stratford Shakespearean Festival," "Stan Getz and J.J. Johnson at the Opera House": All of these records, and many more like them, exist because of Norman Granz.

Granz was notorious in the world of jazz for his arrogance. He was the kind of man who never hesitated to say that he knew better than you, even when he didn't. But when it came to the musicians he admired, he was genuinely modest. "He looks upon himself as a kind of conduit down which the music has flowed, that's all," one of his close friends said. "In that sense, he has no ego at all." That's why he was reluctant to cooperate with the many scholars who sought to chronicle his achievements. "I don't care about posterity," he told Mr. Hershorn. "I don't care about what I accomplished, if anything." Maybe he didn't -- but posterity will.
Posted by Arnaldo DeSouteiro at 3:07 AM