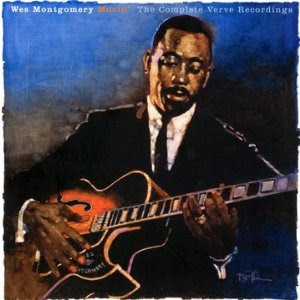 All eight of the albums Wes Montgomery issued on Verve in the mid-'60s (including the two sessions with organ wiz Jimmy Smith) are reunited on this 5-CD box set, plus many bonus tracks – packaged in the Hip-O Select 7" book-styled graphics, complete with lots of liner notes.
In addition to the bonus material, you'll get the full tracks from the albums "Movin Wes" (arranged by Johnny Pate), "Bumpin'" (Don Sebesky's first collaboration with both Wes and Creed Taylor!), "Smokin At The Half Note" (with the Wynton Kelly Trio), "Goin Out Of My Head" (arranged by Oliver Nelson), "Tequila" (scored by Claus Ogerman), "California Dreaming" (Sebesky is back), "Jimmy & Wes - The Dynamic Duo" (Oliver Nelson once again) and "Further Adventures Of Jimmy Smith & Wes Montgomery". 91 tracks in 383 minutes. Original sessions produced by Creed Taylor & engineered by Rudy Van Gelder.

It's worth to mention that, curiously, besides the original Verve CD releases, most of these albums were also reissued, in 1993 and 1994, on Creed Taylor's own CTI label, with new artworks by his son Blake Taylor and using different cover pics by his favorite photographer, Pete Turner.