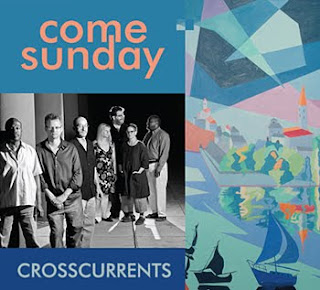 "They smartly balance gospel sentiment and the jazz impulse to refresh (and sometimes entirely remake) these familiar spirituals," critic Neil Tesser wrote about Come Sunday in the Chicago Jazz Music Examiner. "You don't need to love folk music or gospel to appreciate what Allemana has done here, transforming songs from those sources into swinging and memorable renditions; more often than not, they recall the 'soul jazz' of the 60s, crossed with the cool, rich harmonies of contemporaneous groups like the Swingle Singers and the Double Six of Paris."

In addition to Allemana, the group is comprised of vocalists Bill Brickey, Sue Demel, Alton Smith, and Lindsay Weinberg, as well as bassist Al Ehrich and drummer Lenny Marsh. The disc's title refers not only to the unique musical fusion the group achieves but also to the recurring water themes that flow through the set of songs that includes "Jesus Gave Me Water," "Down by the Riverside," "Wade in the Water," and "Deep River."

"I found that a common thread between gospel and jazz was the improvisational nature of the expression of melodies, the strong rhythmic feeling, a spiritual feeling in the music, and improvisations based around a theme," says Allemana, who's recorded three albums as a leader and has been a mainstay of saxophonist Von Freeman's band since 1997. "The biggest challenge was to make each song its own unique journey. It was so rewarding to see how my ideas came to life with this band. The singers brought so much of their own voices to the music, adding things I hadn't thought of."

All seven members of Come Sunday teach at Chicago's venerable Old Town School of Folk Music, as well as performing with a variety of other groups. The impetus for the group came when Ehrich approached Allemana, Brickey, and Demel to record the spiritual "The Welcome Table" (in Allemana's jazz arrangement) for the 2007 multi-artist CD "Old Town School Songbook: Volume 4."

That recording turned out so well that Brickey suggested they add two other vocalists and a rhythm section to delve further into the jazz-gospel convergence. At their first rehearsal, in 2008, the seven members clicked perfectly -- and decided to form a permanent group. Brickey has been Come Sunday's musical visionary, says Allemana: "He introduced me to all the gospel artists, he brought the music to me, and he also trusted me totally so I was able to write whatever I wanted."

Brickey, who has an avid interest in the history of the Civil Rights Movement, was struck by how some of the songs on Crosscurrents -- "Keep Your Hand on the Plow" and "I'm on My Way to Canaan Land," in particular -- had been adapted during the freedom struggles of the 1960s to lift spirits during demonstrations and the mass jailings that often followed. "The singing was powerful, and it gave unity to the people," he says. Come Sunday's next recording project will expand on these themes and focus on old gospel tunes that became Civil Rights-era anthems.

"Emotional integrity is the common thread that brings all these musics together," Brickey states. "In music inspired by gospel, the musicians rely on genuine emotions to help them convey meaning vocally and instrumentally. It is the essential characteristic of 'emotional integrity' that gave birth to blues, jazz, r&b, and finally rock 'n' roll. We owe an entire culture of musical diversity to African gospel music."