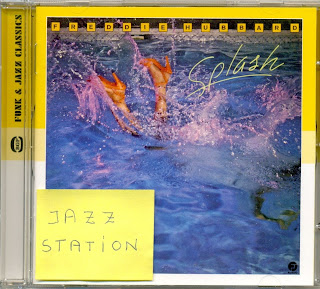 The London-based label BGP, a division of Ace Records, is reissuing today, November 28th, Freddie Hubbard's "Splash." Originally recorded in 1981 for Fantasy, now property of Concord Records, this album appears on CD for the very first time through BGP's "Funk & Jazz Classics" series. It comes with its original artwork plus brand new sleeve notes by Dean Rudland. And no bonus track.

A giant of the jazz trumpet -- and my personal favourite trumpeter, alongside Miles Davis, and followed by Lew Soloff and Randy Brecker --, Hubbard signed with Fantasy after long stints at Blue Note, CTI and Columbia. "Splash" was conceived as a project destined to hit both the contemporary jazz and R&B charts, featuring many vocal tracks, funky beats, and a dated sonority based on the disco-music formula. It comes from a time when Hubbard was trying to emulate Chuck Mangione's style, with its instrumentation including such things as syndrums, solina, Al Hall's flugabones, and Arp & Prophet synths.

Sought after in particular for one track that features Jeanie Tracy's lead vocals, "You're Gonna Lose Me," it became a big favourite with the modern soul crowd in UK. But the best track is the instrumental "I'm Yours," co-written by Clarence McDonald & Al Hall, Jr. Other highlights are Freddie's playing on "Jarri" (using flugelhorn) and "Mystic Lady," and the summertime funk of "Sister 'Stine," with handclaps and a Prophet 5 solo by (Santana's longtime keyboardist) Chester Thompson, then a member of Tower of Power; not to be mistaken with Genesis' second-drummer Chester Thompson, who also recorded with Hermeto Pascoal and Flora Purim.

It would be great if BGP or any other "reissue label" a la Wounded Bird could release Freddie Hubbard's 1998 comeback album for CTI that yielded a cover story on JazzTimes magazine but never saw the light of the day (only an ultra-rare CD-single came out as a promo for radio stations, including Hubbard's rendition of "My Heart Will Go On," Titanic's love theme arranged by German genius Jürgen Friedrich.)
Posted by Arnaldo DeSouteiro at 3:15 AM

Happy to see this reissue.

Happy to know this.