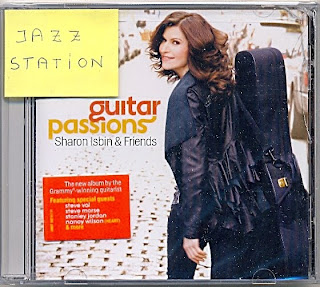 Renowned classical guitarist Sharon Isbin, whom critics have acclaimed as “the pre-eminent guitarist of our time”(Boston Magazine) and “the Monet of the classical guitar,” (Atlanta Journal) is following her Grammy-winning 2009 Sony Masterworks debut album "Journey To The New World" with another extraordinary musical exploration, "Sharon Isbin & Friends: Guitar Passions." The new album has a definite Latin American flavor, but the journey this time is focused more on her musical mentors.

"I'm paying tribute to my guitar heroes," Isbin says. "These are artists whom I admire greatly, who are also heroes in their own realms." The artists include fellow guitar greats who are also great friends with whom she has collaborated. "Steve Vai has been a dear friend and duo partner for years," Isbin says, singling out the rock guitarist/composer, who improvises with her on "La Catedral" by famed Paraguayan composer Agustin Barrios Mangoré.

"Stanley Jordan is another hero and great friend," she adds, and the innovative jazz guitarist joins her in his stunning arrangement of "Sonidos de aquel dia," by the Argentinean guitarist/composer Quique Sinesi.

And so it goes throughout "Guitar Passions." On “Adagio” from Joaquin Rodrigo’s "Concierto de Aranjuez" arranged by Laurindo Almeida -- who first performed his bossa nova setting with Isbin and Larry Coryell on a guitar trio that toured over a period of five years and recorded the acclaimed "2 Guitars 3" for Pro Arte in 1984 -- she relies on Brazilian jazz guitarist Romero Lubambo's improvisational skills along with Dixie Dregs' founder Steve Morse of whom she says, "Steve does some of the coolest playing I've ever heard!"

On "Asturias" by Albeniz, Isbin pays tribute to her hero and teacher, the Spanish classical guitar great Andrès Segovia with whom she first studied at age fourteen. "He had a tone that shimmered like a diamond, and to be able to sit inches from him and hear that magical sound was a revelation that will stay in my mind and ears forever," Isbin says. "It has inspired me to explore the beauty of sound -- its colors and contrasts -- in my own playing."

Somewhat surprising, perhaps, is the appearance of Heart's Nancy Wilson (not to be mistaken with jazz songstress Nancy Wilson) on Sharon Isbin and Friends’ version of the Heart classic "Dreamboat Annie." "I listened to Heart so much in college," says Isbin, who graduated cum laude from Yale University and earned a Master of Music degree from the Yale School of Music. "When I approached Nancy about doing a rendition of Dreamboat Annie she was very enthusiastic, and she's a wonderful guitarist who has to be included among my heroes."
Isbin's version of "Dreamboat Annie" adroitly fits in with the album's secondary theme - after its "friends" focus - of music of South America and Spain.

"We put in a little bossa nova instrumental at the end to make it part of the whole instead of the exception!" she explains. Otherwise, "Guitar Passions" covers Latin music territory directly, from countries including Brazil, Paraguay, Argentina, Colombia and Spain. And within the Latin context, the selections show the remarkable range that has typified Isbin's career.

While "Chovendo na Roseira" -- also recorded by Isbin & Barbosa-Lima on "Brazil, With Love", a tune originally composed as "Children's Games" by Antonio Carlos Jobim for the soundtrack of the 1970 motion picture "The Adventurers" and later retitled "Double Rainbow" after Gene Lees added English lyrics -- honors her late friend Jobim, "Alfonsina y el Mar" is by iconic Argentinean composer Ariel Ramirez, and derives from the final poem from a famed poet who takes her life rather than succumb to a terminal illness. "Porro," by Colombian guitarist-composer Gentil Montaña, is featured in an arrangement by Gustavo Colina in which Isbin duets with herself.

Isbin stresses that "Guitar Passions," like most of her recording projects, was created organically. "It's only when I step back afterwards that I can say, 'Ah! That's why it happened!'" she says. “It’s our passion for the guitar and musical discovery that has brought us all together.”
Isbin's preceding album, "Journey to the New World," won her the 2010 Grammy Award for Best Instrumental Soloist Performance. The award made her the first guitarist in 43 years to receive a second classical Grammy (she received the same award in 2001 for her album "Dreams of a World," which also featured Thiago de Mello -- making her the first classical guitarist to win a Grammy in 28 years); she was also the only classical artist to perform in the 52nd Annual Awards presentations.

She has performed as a soloist with over 160 orchestras and is a worldwide concert star who tours the world constantly. A documentary on her work and life will be released in 2012. For now, "Guitar Passions" deserves all our attention (and a Grammy too!)
Posted by Arnaldo DeSouteiro at 6:31 AM