Although it's not mentioned in the NYT obituary below, my all-time favorite Lee Pockriss' song is "I Haven't Got Anything Better To Do," a song that producer Creed Taylor also loves, having selected it for CTI albums by Stanley Turrentine ("Salt Song" - 1971) and Esther Phillips ("Capricorn Princess" - 1976). Brazilian bossa princess Astrud Gilberto also covered it as the title track of her Brooks Arthur-produced 1968 LP for Verve. 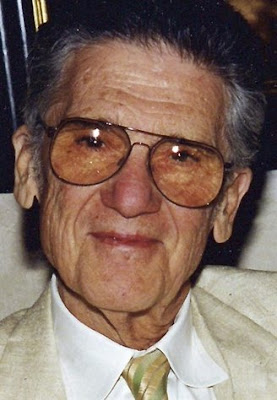 Lee Pockriss, who wrote the music for midcentury pop hits like "Itsy Bitsy Teenie Weenie Yellow Polka Dot Bikini," "Catch a Falling Star" and "Johnny Angel," died on Monday at his home in Bridgewater, Conn. He was 87.

His death was confirmed by his nephew Adam Pockriss.

Perry Como made a hit of the gentle ballad "Catch a Falling Star" ("Put it in your pocket / Save it for a rainy day"), which Mr. Pockriss wrote with Paul Vance, in 1957. Shelley Fabares introduced Mr. Pockriss and Lynn Duddy's wistful love song "Johnny Angel" ("I dream of him and me / And how it's gonna be") as her teenage character on the family sitcom "The Donna Reed Show" in 1962.

But in between, Mr. Pockriss struck a very different note in another collaboration with Mr. Vance: "Itsy Bitsy Teenie Weenie Yellow Polka Dot Bikini," a novelty number about a young woman "afraid to come out of the water" and be seen in the revealing swimsuit she was wearing. Her reluctance was understandable, because the navel-revealing bikini was still considered relatively shocking outside Hollywood and the French Riviera. In fact, the song has been credited with helping it gain acceptance.

Brian Hyland had a No. 1 hit with the song in 1960, and it was so inescapable as part of popular culture that a Hollywood film, Billy Wilder's "One, Two, Three" (1961), affectionately lampooned it with a scene in which East German soldiers tortured a character (played by Horst Bucholz) by forcing him to listen to the song repeatedly.

Mr. Pockriss also worked in musical theater for decades. He wrote the music and Anne Croswell wrote the lyrics for the 1963 Broadway show "Tovarich," for which Vivien Leigh won the Tony Award for best actress in a musical. The two also collaborated on "Ernest in Love," a musical version of Oscar Wilde's "Importance of Being Earnest," first produced off Broadway in 1960 and revived by the Irish Repertory Company in 2009; "Conrack," based on Pat Conroy's book, which had an Off Broadway production in 1987; and "Bodo," about a 12th-century goatherd, produced at the Promenade Theater in 1983.

With the lyricist Carolyn Leigh and Hugh Wheeler of "Sweeney Todd," Mr. Pockriss created "Gatsby," a musical based on F. Scott Fitzgerald's novel "The Great Gatsby," in 1969. It was best known as an unproduced work, but this year it received two concert performances as part of the New York Musical Theater Festival. David Rooney, reviewing it in The New York Times, said that the songs succeeded in "evoking Fitzgerald's characters, spreading a beguiling carpet of melancholy beneath all that jazz age revelry."

"It made me curious," he added, "to see a full production."

Lee Julian Pockriss was born on Jan. 20, 1924, in Brooklyn, the son of Joseph and Ethel Price Pockriss. He attended Erasmus Hall High School and Brooklyn College, and studied musicology at New York University. He served in the Army Air Forces during World War II as a cryptographer in the South Pacific.

He is survived by his wife, Sonja, and a brother, Harold.

Mr. Pockriss's talent was recognized early. In 1950 The Times reported the presentation of an American Federation of Music Clubs award. The $100 first prize in composing went to a young graduate student, Lee Pockriss, of 325 Ocean Avenue, Brooklyn.
Posted by Arnaldo DeSouteiro at 4:31 AM