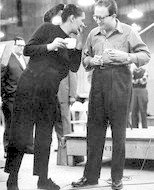 Composer Ray Ellis, who arranged such classics as "Chances Are" by Johnny Mathis, "Splish Splash" by Bobby Darin and "Standing on the Corner" by the Four Lads, died Monday in Encino of complications from melanoma. He was 85. During a career that spanned almost 65 years, the Philadelphia native also arranged for acts including Tony Bennett, Doris Day, the Drifters, Connie Francis, Judy Garland and Ray Price.

Ellis, in collaboration with his son Marc, wrote original music for many of the animated series produced by Filmation Studios, along with the original "Spider-Man" cartoon, "The NBC Nightly News" and "The Today Show." Father and son also created music for game shows including "Sale of the Century." In the late 1940s and early '50s, Ellis played tenor sax in the Gene Krupa Band and the Paul Whiteman Band and performed on live TV with jazz combos on WCAU in Philadelphia.

He was discovered in 1955 by Columbia Records producer Mitch Miller, and under the famed bandleader's guidance, Ellis arranged a string of top 10 records for acts including the Four Lads, Mathis, Bennett, Darin and Chris Connor. Ellis also recorded instrumental albums under the Ray Ellis and His Orchestra banner for Columbia and RCA Records.

Most recently, Ellis worked on projects with Adam Sandler, Barry Manilow and Bette Midler. During his retirement years, he was involved in fundraising efforts for the Ojai Music Festival. Among Ellis' survivors is his wife of more than 60 years, Yvette.
Posted by Arnaldo DeSouteiro at 6:16 AM