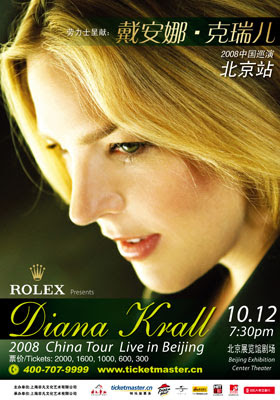 October 12, 2008
Beijing Exhibition Theatre
[Buy Tickets]
After the sold-out concert in China, three days ago in Shangai, Diana Krall performs tomorrow in Beijing. She will return home next week for a few days before she hits the road again, this time in South America, where she will record her new DVD in Brazil.

Diana's new CD is scheduled to be released in early 2009. More details about it, the DVD and the Brazilian tour can be found here:
http://jazzstation-oblogdearnaldodesouteiros.blogspot.com/2008/10/adlib-october-2008.html

Posted by Arnaldo DeSouteiro at 6:04 PM