Always a restless creative spirit, a constantly self-renewing citizen of the jazz world and one of the music’s leading lights, saxophone legend Sonny Rollins has long been ambivalent about, even averse to, the business side of music. However, since forming his own record label, Doxy, in 2005, Rollins has emerged as an inspired—and surprisingly assertive—entrepreneur.

Road Shows is the exciting inaugural release in a planned series of outstanding live Sonny Rollins recordings from the last 30-plus years. The seven tracks on the new CD, culled from the Carl Smith collection and Rollins’s own personal soundboard tapes, were recorded in the U.S., Canada, Poland, Japan, France, and Sweden. Featuring the saxophonist with a variety of sidemen—including, on one track, the Christian McBride–Roy Haynes trio that appeared with him at his 50th Anniversary Carnegie Hall concert in 2007—"Road Shows" captures the Saxophone Colossus in full flight, dazzling audiences around the world.

"In Vienne" was produced by French television and offers an up-close glimpse at Rollins onstage—in high-definition video—as he unfurls a superb hour-long set before a euphoric crowd at the 2006 Jazz à Vienne Festival. The saxophonist, who famously spent two years (1959-61) practicing on New York’s Williamsburg Bridge, above the East River, finds that “playing out of doors is always great. But Vienne, with its Roman amphitheater, is a particularly photogenic place, a beautiful venue. The little town is on the Rhône River. And it was warm that night—just perfect weather.”

In the late 1980s, Rollins began to record many of his concerts for archival purposes with possible future release in mind, and also to circumvent bootlegs, which have been a long-standing problem for the artist. “I was much less intimidated by the tape at live concerts” than in the studio, he admits. When the tape was always rolling, “I stopped thinking about it, and it was much easier for me to get a natural performance.”

From the start the intention was to record all of Sonny’s concerts. Due to unforeseen technical problems or permission problems with venues, however, it was not always possible, according to Road Shows producer (and Rollins trombonist) Clifton Anderson. Of the approximately 600 concerts Rollins has performed since the late ’80s, Anderson estimates that as many as one-third are in their archive, in whole or in part.

“There were performances that at the time they were done, I thought they might be acceptable at a later date in case I chose to release,” says Rollins. “But I hadn’t really listened; I filed it in my mind, and later had to stir my memory as to which ones might be good.”

When the time came to program the new CD, says Anderson, “we both remembered that the concert in Toulouse was a pretty good show, and Sonny remembered that Tama was a good performance, so I went back and listened to those in particular. That’s how we arrived at our choices.”

Four tracks from the Rollins archive are included in Road Shows, vol. 1: “More Than You Know” (2006, Toulouse), which Sonny “brought out of retirement,” not having played it since the 1950s, when he recorded it with Thelonious Monk; “Tenor Madness” (2000, Tama City, Japan), whose last appearance on a Rollins disc was the live G-Man in 1987; “Nice Lady” (2007, Victoria, BC), the first recording of a new Rollins calypso; and “Some Enchanted Evening” (2007, New York City), from his 50th anniversary Carnegie Hall concert with Christian McBride and Roy Haynes.

Road Shows’ remaining three tracks were selected from Carl Smith’s collection—“Blossom” (1980, Umea, Sweden), a fascinating, little-known Rollins original that “came and went pretty fast in the repertoire,” says Rollins; “Easy Living” (1980, Warsaw), from Sonny’s first trip behind the Iron Curtain (“the people were starved for music”); and “Best Wishes” (1986, Tokyo), previously recorded on his 1982 Reel Life album.
**************
For future Road Shows compilations, Anderson and Rollins will have not only their own archives and Carl Smith’s to draw from. “People have also submitted things to us,” says Anderson, “most recently a tape from Keystone Korner in the mid-1970s and a cassette from the Bottom Line. The bands are different, the material’s different; the one common denominator is Sonny killin’ through all of it.”

Doxy Records also plans to release a CD by Clifton Anderson entitled "Decade" in January 2009; and Rollins is looking forward to recording a new studio album of his own in the early part of the year.

For most of his career, Rollins reflects, “I was fortunate in having had my wife [Lucille] handle all this stuff I don’t like doing. At the time she took over my management, in the early ’70s, I already knew what I wanted to portray. Freedom Suite and Way Out West, for instance—those were my concepts.”

Rollins had experienced promoter problems during his career, which led him to hold certain convictions about the business. But Lucille’s involvement in his business affairs afforded him, for the first time, the benefits of effective artist representation—“and everyone had to be nice to her.”

His wife’s passing in late 2004 coincided with the expiration of his recording agreement with his longtime label, Milestone—and the establishment of Doxy Records. “I’m familiar with what needs to be done,” Rollins says, “so I’m trying to be as involved as possible. We in jazz have to adapt to the new technology.”

As Rollins told NPR’s Howard Mandel, “The corporate culture is anathema to jazz. We don’t like cookie-cutter everything exactly the same way. We’re about grace and thinking things at the moment, like life is. Life changes every minute. I mean, a different sunset every night—that’s what jazz is about.”
*************
Walter Theodore Rollins was born in Harlem, New York on September 7, 1930, of parents native to the Virgin Islands. His older brother Valdemar and sister Gloria were also musically inclined but only Sonny veered away from classical music after his uncle, a professional saxophonist, introduced him to jazz and blues.

He gravitated to the tenor saxophone in high school, inspired in particular by Coleman Hawkins. By the time he was out of school, Rollins was already working with big-name musicians such as Bud Powell, Fats Navarro, and Roy Haynes. In 1951 he debuted as a leader on Prestige; his affiliation with that label also produced classics such as Saxophone Colossus, Worktime, and Tenor Madness (with John Coltrane).

In early 1956, until he went out on his own permanently as a leader in the summer of 1957, Rollins played in the Max Roach–Clifford Brown Quintet, one of the most definitive (and tragically short-lived) hard-bop ensembles of its day. Often with his own pianoless trio, Rollins then entered a tremendously fertile period during which he recorded major works such as A Night at the Village Vanguard, Way Out West, and Freedom Suite.

In 1959, Rollins took the first of his legendary sabbaticals. Living on Manhattan’s Lower East Side, he was often spotted on the nearby Williamsburg Bridge, deep in a rigorous practice regimen. “I wanted to work on my horn, I wanted to study more harmony,” he told Stanley Crouch in The New Yorker.

When Rollins returned to performing in 1961, he recorded "The Bridge" with Jim Hall and Bob Cranshaw, led a quartet with trumpeter Don Cherry and drummer Billy Higgins, and recorded with his idol Coleman Hawkins. He also received a Grammy nomination for his score for the popular film Alfie. At decade’s end he undertook one final hiatus, studying Zen Buddhism in Japan and yoga in India. While living in an ashram, he considered leaving music permanently in order to pursue spiritual studies, but a teacher persuaded him that music was his spiritual path, and an uplifting force for good.

In 1972, with the encouragement and support of his wife Lucille, who had become his business manager, Rollins returned to performing and recording, signing with Milestone and releasing "Next Album." (Working at first with Orrin Keepnews, Sonny was by the early ’80s producing his own Milestone sessions with Lucille.) His lengthy association with the Berkeley-based label produced two dozen albums in various settings—from his working groups to all-star ensembles (Tommy Flanagan, Jack DeJohnette, Stanley Clarke, Tony Williams, George Duke); from a solo recital to tour recordings with the Milestone Jazzstars (Ron Carter, McCoy Tyner); in the studio and on the concert stage (Montreux, San Francisco, New York, Boston). Sonny was also the subject of a mid-’80s documentary by Robert Mugge entitled "Saxophone Colossus"; part of its soundtrack is available as "G-Man."

He won his first performance Grammy for "This Is What I Do" (2000), and his second for 2004’s "Without a Song" (The 9/11 Concert), in the Best Jazz Instrumental Solo category (for “Why Was I Born”). Sonny, Please was nominated for a best jazz album Grammy in 2006. In addition, Sonny received a Lifetime Achievement Award from the National Academy of Recording Arts and Sciences in 2004.

In June 2006 Rollins was inducted into the Academy of Achievement at the International Achievement Summit in Los Angeles, and in May 2007 was a recipient of the Polar Music Prize, presented in Stockholm.

Most recently, he was named best tenor saxophonist in the 2008 Down Beat Critics’ Poll and the Jazz Times Readers’ Poll, and by the Jazz Journalists Association in their June 2008 awards event. “I believe that jazz is the music which best expresses the stirrings of the human soul,” says Rollins.

A frequent visitor to Japan, Rollins returned there in spring ’08 and, while in the neighborhood, made his premiere concert appearances in Singapore, South Korea, and Australia (at the Sydney Opera House). He will perform three concerts in Brazil this fall—his first visit there in nearly 25 years—followed by a tour of Germany in November/December.

“I feel tremendously privileged to have succeeded to some extent in a music that includes the likes of Louis Armstrong and Fats Waller—all of these guys who I thought were such tremendous people putting out all of this positive music,” Rollins says. “It was all that I could ever dream—to be involved in this.” 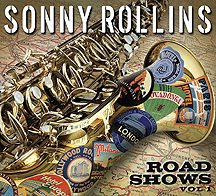 Tracks 2, 5, 6, and 7 from the Sonny Rollins Audio Archives. Tracks 1, 3, and 4 from the collection of Carl Smith.
Design, cover art—Jamie Putnam
Booklet photos—John Abbott, Clifton Anderson
At the time of the performances heard on tracks 1-5, Sonny Rollins was under contract to Milestone Records.
Posted by Arnaldo DeSouteiro at 8:07 AM