CD of the Day - "Crusaders: Pass The Plate" 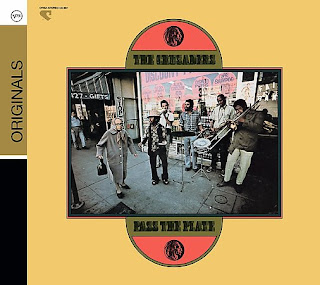 Available at www.dustygroove.com
That's what they say:
"Great work from one of the funkiest periods in the career of the Jazz Crusaders -- that point when they first dropped the "jazz" from their name, and started moving into groovier territory! The set's a bit electric, but never as much so as their later, bigger hits -- just enough so that the basslines bump the tunes along strongly, and the keyboards start to sparkle in the mix too -- but still leaving plenty of space for acoustic contributions on piano, trombone, and tenor. Arthur Adams joins the group for a bit of guitar, which is well-placed -- and titles include the massive "Pass The Plate" medley, which runs for over 15 minutes -- plus "Young Rabbits 71/72", "Goin' Down South", "Listen & You'll See", "Greasy Spoon", and "Treat Me Like Ya Treat Yaself"."
Posted by Arnaldo DeSouteiro at 6:36 AM