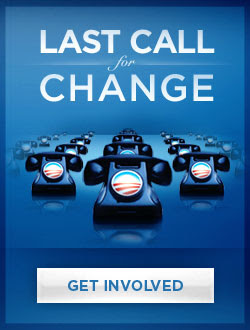 One of the most important things you can do this weekend is find a Last Call for Change event near you.
You'll join fellow supporters calling undecided voters in crucial battleground states. With so many smears and false rumors circulating, voters need to hear about Barack. They also need crucial information about early and absentee voting. No experience is required, but please bring your cell phone. Staff will give you everything else you need to succeed.
Find an event near you.
As Election Day approaches and our economic situation continues to worsen, we can't afford to leave any votes on the table. In many states, voting has already begun, and time is running out to reach potential supporters before they decide which candidate will bring the change we need. Please join this Last Call for Change. There's an event near you: http://CA.barackobama.com/CAlastcall
*************
"Who is Barack Obama?"
John McCain keeps asking this question at his rallies -- then he gives answers that are shockingly false and negative. That's why it's vital that you sign up to volunteer for at least one day during the final days of this election. Voters won't know the truth about Barack unless supporters like you reach out to them. I also wanted to share a video of personal moments from behind the scenes at the Democratic National Convention in Denver, so you can see Barack and Michelle as they are -- decent, warm, and kind people with a loving family.
Watch the video and get to know the Obamas a little better. Then sign up to volunteer on a crucial day before the Election:
Our opponents try to stir up doubt and fear by questioning who Barack really is -- as if after more than a decade in public office, more than 20 months on the campaign trail, dozens of debates, two books written by him and dozens more about him, people still don't have enough information to decide for themselves who should lead our country. Millions of Americans have gotten to know Barack Obama as an American who's devoted his life to things bigger than himself -- his community, his country, and ordinary citizens looking for a voice.
Our challenge now is to do the same -- to devote these last weeks to a cause bigger than ourselves. These tough economic times make our cause more urgent and the stakes even higher. Barack needs your help to win this election and bring the change we need to Washington. Can you give a day of your time during the last four days of the election? Watch the video, share it with others, and get involved: http://my.barackobama.com/4Days
Only 24 days remain until Election Day. Won't you commit at least one to ensure our victory?
**********
The story is all over Progressive Talk Radio today about the MCaincampaign sending absentee ballot applications to registered democratsor people that have donated to Obama's campaign. These ballots aredilberately misleading and have postage paid return addresses that arefor an election clerk that is outside of your city or town.
What this will end up doing is either having your vote not counted, orif you return one of these, they will cite you for election fraud,saying that you already voted absentee. These ballots are only beingsent out in 'purple states' and this is a big deal. This is calledvoter caging, and is a huge problem.
The McCain campaign is stealing this election as we speak. Please get this information out to as many people as you can, and tell anyone you know who has received one of these ballots that they need to contact their city election clerk or the supoervisor of elections immediately.Also call the local media and let them know what isgoing on. The main stream media is never going to cover this so we have to depend on our ground campaign to get the word out to our voters.
Posted by Arnaldo DeSouteiro at 7:16 AM