DVD of the Day - "Funk Brothers: Live in Orlando" 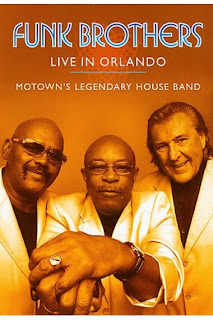 The surviving members of Motown's legendary house band, guitarist Eddie Willis, bassist Bob Babbitt, and drummer Uriel Jones perform - on December 31, 2005, during a New Years Eve part ay the Universal Theme Park in Orlando, Florida - a set of the greatest classic Motown songs, on which they provided instrumentation. In front of a wildly enthusiastic New Year's Eve crowd in Orlando, they perform famous Motown hits with the same zeal as they were when they were first recorded 40 years ago. As an added bonus, the DVD contains interviews with the 3 surviving Funk Brothers members: Eddie Willis, Bob Babbott & Uriel Jones.
Also featuring the guests: Donna Curtin, Delbert Nelson & Marcia Ware (vocals), Robert Jones (keyboards & vocals), Ray Monette (guitar), Spider Webb (drums) & Trenita Womack (congas, percussion & vocals), plus a horn section.
The legendary session musicians known as the Funk Brothers have long been considered Motown's best kept secret. To Motown's stars, the four wooden steps leading down to Hitsville's basement were a bridge to a land of dreams. But to the studio musicians who shaped the Motown sound, the staires were a gateway to a workplace, a cramped, smoke-stained, dimly lit room they affectionately dubbed "The Snakepit."
For almost 14 years on a daily and nightly basis, the musicians transformed that basement into a hit factory. They rolled masterpieces off the production line in an hour or less, trading friendly insults as they worked. Known as Funk Brothers, they were utterly unknown. Barry Gordy, Motown's big boss, demanded assembly-line efficiency. Session started at 10AM and since they could call for a session seven days a week, the Funk Brothers were always on call. When they were not recording at Studio A, they could often times be found jamming at Millie's Chit Chat Lounge on 12th Street.
They have played on more #1 soul and r&b recordings than anyone in the world... The "Standing in the Shadows of Motown" movie let everyone know of the Funk Brothers' contributions to the Motown songs.
Though their names were never officially in lights, as the label's "house band" the players provided the backing tracks for a long list of hits including "Signed, Sealed, Delivered," "Dancing in the Street," and "Heatwave." "Live in Orlando" puts these seasoned pros front and center, playing the songs that they helped make famous.
Posted by Arnaldo DeSouteiro at 8:08 AM