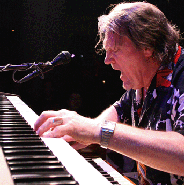 We have a limited number of tickets priced at £15 for Brian Auger's Oblivion Express, to take advantage of this offer click here.

For over forty years, Brian Auger has been a musician's musician. Jazz pianist, bandleader, session man, Hammond B3 innovator, and key player in the rise of jazz/rock fusion, Brian has done it all. An incredible gentleman with one of the most varied careers in music, he has incorporated jazz, early British pop, R&B, soul and rock into an incredible catalog that has won him legions of fans all over the world. Auger's early success coincided with the British invasion in the US and when he heard Jimmy Smith albums, he decided to get involved with a Hammond B3, an organ few British musicians could play.

His session work on The Yardbirds"For Your Love," kicked off the Yardbirds recording career, and also made Brian an in demand session man around London.Auger's bands have included Steampacket wuith John Baldry, guitarist Vic Briggs, Rod Stewart and Julie Driscoll; then the Trinity, a combination of blues, Motown and Messengers.

The Oblivion Express started up in 1970 and in the mid to late 1990's, Auger formed his own family version of the Oblivion Express, with his children Karma on drums and Savannah performing, as the lead vocalist, along with a bassist Auger has selected. Brian Auger is a true original, and we are fortunate to have him and his musical legacy as a vibrant part of today's music scene.

PS: "He was my first Hammond idol, the guy responsible for making me want to play organ", says ´Brazilian keyboard wiz José Roberto Bertrami, who, by coincidence, will performing with Azymuth on the same Jazz Cafe two days later, on October 22nd.