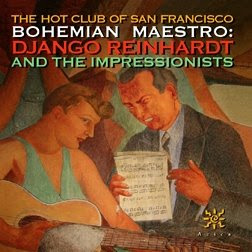 The Hot Club of San Francisco, in its 20-year history, has released ten adventurous, critically acclaimed CDs in the passionate gypsy-jazz style that traces its origins to guitarist Django Reinhardt and his Quintette du Hot Club de France.

On their new CD, "Bohemian Maestro: Django Reinhardt and the Impressionists," the Bay Area quintet explores classical treatments of several compositions by Django as well as early 20th century French classical music that may have inspired the gypsy guitarist during his time in Paris. Bohemian Maestro¸ the group's Azica Records debut, will be released November 25.

Works by Claude Debussy, Francis Poulenc, Heitor Villa-Lobos, and even Jelly Roll Morton are featured on the new CD alongside originals by the Hot Club's guitarist and bandleader Paul Mehling and violinist/arranger Evan Price in a seamless presentation of both Reinhardt's chamber jazz and his blazing, more characteristic gypsy swing.

The album's centerpiece is a portion of a Catholic mass, "Messe," written by Reinhardt (1910-1953) to honor the Romany people. The score was lost, however, and all that remained was an extremely rare organ recording. Evan Price transcribed that recording and wrote the arrangement for woodwinds -- the all-female New York-based Aeros Quintet, who also play on Django's "Nymphéas" (originally recorded with big band).

"Some of the pieces are important works by people whom we know Django was digging," says Mehling. "Though we cannot know for certain that he heard these exact pieces, it is still great fun to imagine him coming into a Quintette rehearsal wanting to record his version of something by Jelly Roll Morton.

"The Quintette was known to explore the classical repertoire and mine it for gems that it could present in their style," he adds. "We like to dream of Django having spent more time in this milieu by presenting our interpretations of what he might have done with Poulenc, Debussy, Villa-Lobos -- all of whom could be found in Paris at this fertile period of time and who could very probably have rubbed elbows with Django himself."

Bohemian Maestro's cover displays a detail from a 1936 WPA fresco at the Beach Chalet in San Francisco, by the French painter Lucien Labaudt. The painter's daughter holds a guitar while a man who is presumably Django (he's the only unidentified image in the mural) points to sheet music in his hand (music that, incidentally, he was unable to read). 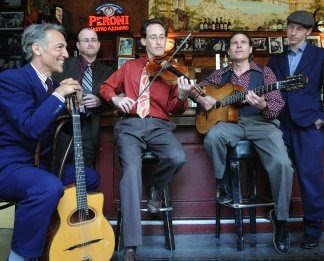 (photo by Stuart Brinen)
The current edition of the Hot Club of San Francisco has been together for five years, anchored by Paul Mehling and two-time Grammy-winning violinist Evan Price (a ten-year veteran of the Turtle Island String Quartet) and also including Jeff Magidson and Jason Vanderford on twin rhythm guitars and bassist Clint Baker.
In 2000, the HCSF was the first American band invited to play the Festival de Jazz Django Reinhardt in Samois-sur-Seine, ground zero for the current Django revival. More recently, in September 2008, the band returned to DjangoFest NorthWest (in Seattle) to play on the same bill as Holland's Rosenberg Trio, who rank among the indisputable heirs to the gypsy-jazz crown.
"We have a swing or die approach to the music that's distinctly American," says Mehling. "We're trying to challenge the tendency to slavishly imitate Django's style, without watering down the gypsy tradition or diluting the music. We bring out that visceral element of the music."
The HCSF tours regularly, sometimes presenting "Silent Surrealism," an evening of silent films by directors such as Charlie Bowers, accompanied by gypsy jazz. Dates in support of Bohemian Maestro include Kuumbwa in Santa Cruz 11/13, and Yoshi's San Francisco 11/17.
Posted by Arnaldo DeSouteiro at 8:08 AM