Vocal CD of the Month - "Milton Suggs: Things To Come" 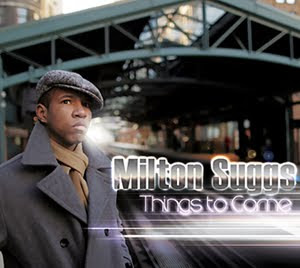 So far the best album released by a male jazz vocalist this year, "Things To Come" is full of surprises. Suggs sings his soul out, revealing an impressive maturity. His silky voice and creative power are in service of the highest musicality, surrounded by many notable newcomers. Simply put, Milton Suggs's new CD, "Things to Come," marks the arrival of a major jazz vocal talent. Blessed with a sumptuous baritone, the 27-year-old Chicago native also displays his prodigious skills as arranger and composer on the disc, released on his own Skiptone Music label.

"Things to Come" was recorded in November and December of 2009 with some of Chicago's finest young instrumentalists, including trumpeter Marquis Hill, trombonist Vincent Gardner (who shines on the ballad "We Shall Overcome"), and pianist Willerm Delisfort. The album's distinctive repertoire features a set of original compositions, vocalese treatments of jazz standards and instrumental solos, and unique readings of "'Round Midnight" and the African-American anthems "We Shall Overcome" and "Lift Every Voice and Sing."

Among the highlights: "Fantasy for Two," with Milton's lyrics to the melody of the Cedar Walton composition "Ugetsu" (aka "Fantasy In D" aka "Polar AC") followed by his vocalese lyrics to a Kenny Garrett alto saxophone improvisation on the tune, which I love since Freddie Hubbard's version ages ago; "My Last Goodbye," on which guitarist Larry Brown, Jr. evokes a John Scofield-like tone & phrasing; "JL's Blues (Every Night and Every Day)," an extravagant slow blues on which Suggs delivers his lyrics to a Roy Hargrove trumpet solo and a Justin Robinson alto sax solo; and "Your Smile," based on the chord changes of "Cherokee" and featuring the vocalist's words set to one chorus of a 1947 Charlie Parker solo.

The pop-oriented tracks are very nice too, specially the r&b ballad "'Cuz I'm In Love With You" (a duet with songstress Sarah Marie Young), and the boogaloo/disco groove of the radio-friendly "Hope." Even the remake of "'Round Midnight" sounds fresh and appealing.

Suggs has seemingly burst on the scene with the release of the new CD, and in fact the former piano student has been concentrating on his singing for a relatively short time. While working on his master's degree at DePaul University a few years ago, he came to the attention of Wynton Marsalis, who was in town doing workshops and heard Suggs singing with the school's big band.

"I called him to talk about some piano stuff," Suggs recalls. "He said something like, 'You should really work on getting your singing together.' Wynton was really the first one to encourage me more about singing."

Suggs went on to study with acclaimed vocal coach Lyndia Johnson, and in June 2009 he recorded a CD of Duke Ellington and Billy Strayhorn standards, "Just Like Me," with the great Chicago pianist Willie Pickens, his godfather and former piano teacher. (Pickens had been a member of Elvin Jones's Jazz Machine, in which Milton's namesake father played bass.)

"While there are a lot of female singers today that call themselves or are perceived as being jazz singers because they sing standards in front of a live rhythm section," he says, "much of what passes for jazz singing by some females does not really approach the music from a jazz aesthetic, and it doesn't at all parallel the approach that jazz instrumentalists are taking toward the music. So if we're talking about jazz singing, then females do outnumber males. However, the sum total is more of a reflection of our musical culture rather than a reflection of jazz itself." Milton Suggs is doing his part to represent the music with his forward-thinking "Things to Come."
Posted by Arnaldo DeSouteiro at 7:38 AM