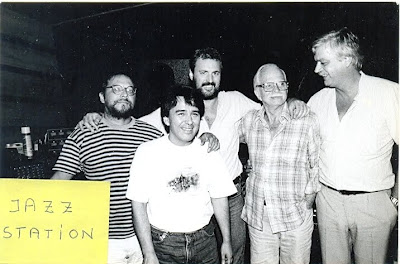 The Rio-based German producer Peter Klam was a big fan of Brazilian music (specially of guitarists Luiz Bonfa and Baden Powell) long before he went to Brazil, to work as director in the Ariola label. At that time (early to mid-80s), Klam signed distribution deals with such jazz labels as ECM and Milestone/Fantasy, inviting Arnaldo DeSouteiro to select the albums that should be released in the Brazilian market. Their collaboration lasted for a couple of years, with the support of strong marketing campaigns, helping to popularize in Brazil such artists as Pat Metheny, Jan Garbarek, Enrico Rava, and McCoy Tyner.
Some years later, while Klam was still working at another big company, PolyGram (now Universal Music), he decided to found a small independent label, Caju Music, being able to secure a distribution deal with PolyGram for the first releases. At a time when record companies were interested only in the young fusion stars (Leo Gandelman, Ricardo Silveira etc) of the Brazilian jazz scene, Klam had the nerve to sign and record albums by such older masters as Baden Powell (his "Live at Rio Jazz Club" was the debut CD release of the label), Luiz Bonfá, Dino 7 Cordas and Canhoto da Paraíba.
Luiz Bonfa's "The Bonfá Magic," produced by Arnaldo DeSouteiro in 1991 both in Rio and New York (featuring Gene Bertoncini, Gaudencio Thiago de Mello, Deodato, Jota Moraes, Nilson Matta & Pascoal Meirelles, amongst others), became the best-selling album of the Caju label in the USA, Europe and Japan, distributed by such labels as Milestone and JVC.
On Caju Music, Peter Klam also released albums by Marco Pereira, Cristovão Bastos, Nonato Luiz, Rildo Hora, Tulio Mourão and an award-winning collaboration between Paulo Moura & Raphael Rabello ("Dois Irmãos"), which received the Sharp Award back in 1992.
After closing Caju Music (most of the masters were sold to the Kuarup label, which also closed its doors in 2008), Klam got a job in the classical music department of BMG.
In recent years, he was out of the music business, developing commercial activities in different areas.
Posted by Arnaldo DeSouteiro at 5:36 AM