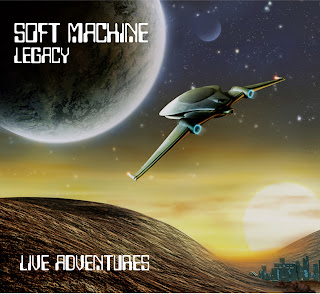 On their rousing new live disc for MoonJune (recorded during the European tour in October of 2009), "Live Adventures," Soft Machine Legacy covers more vintage Soft Machine repertoire than on previous releases, yet reinvigorates the tunes by means of fresh arrangements and expansive, protean improvisation. Soft Machine partisans will rejoice at the inclusion of such repertory gems as “Gesolreut”, in which the band lays bare the funky heart of its signature elliptical ostinato with steaming soli and propulsive grooves; “As If”, an oblique rereading of the Mike Ratledge piece marked by spectral guitar shadings and Travis’s shakuhachi-like flute etchings; and the stirring, elegiac “Song of Aeolus”. And fittingly, the band pays heartfelt tribute to the dearly departed Hugh Hopper with a rendition of his iconic “Facelift”, artfully investigating the intricate twists and turns of its singular long-form melody. This is no potted history of Soft Machine, but a living, breathing music.

With "Live Adventures," Soft Machine Legacy makes a forceful case that the music of Soft Machine is as relevant and ripe with possibility today as it was in the band’sheyday. Longtime fans and new converts alike can take heart in the knowledge that the Soft Machine family tree, with its deep roots in the musical revolution of the ‘60s, continues to sprout new limbs in the new century and shows no signs of slowing. The legacy is in very good hands indeed.

The beauty of Soft Machine’s legacy – and of Soft Machine Legacy the band – is that nearly a half-century after the original group’s inception, that legacy is far from stagnant but continues to evolve to this day. Ever since Soft Machine Legacy was first formed (as Soft Works) in 2002 at the instigation of producer/manager/music-activist Leonardo Pavkovic, the group has amply demonstrated that it is no mere exercise in nostalgia, lazily mining the Soft Machine back catalog; instead, SML has admirably carried the parent group’s spirit of inquiry and exceptional standard of musical excellence forward into the present.

Just as the original Soft Machine was in a state of continual metamorphosis in terms of both personnel and musical approach – shape-shifting over time from a psychedelic pop band to a proto–prog rock outfit to pioneers of adventurous jazz-rock fusion, and ranging from trio to septet configurations – Soft Machine Legacy has been in constant flux as members have come and gone, each new arrival placing his distinctive stamp on this musical work in progress. It is a tribute to the open-ended nature of Soft Machine’s ingenious compositional frameworks that they can accommodate such a wide range of strong musical personalities.

With the untimely passing in June 2009 of the brilliant and widely mourned bassist/composer Hugh Hopper, Soft Machine Legacy lost its last link to the formative 1960s incarnations of Soft Machine. Happily – and in a fitting case of déjà vu – his place has been taken by the only other bassist capable of filling the role, Roy Babbington, who after having made cameo appearances on Soft Machine’s 4 and 5 went on to replace Hopper as the group’s regular bassist from 1973-76, notably on the unfairly overlooked Seven. Aprodigious player and improviser whose impressive curriculum vitae includes stints with such groundbreaking units as Nucleus, the Keith Tippett Group, Ovary Lodge and Delivery, Babbington injects fresh energy and musical intelligence into a lineup that already boasts such formidable instrumentalists as drum statesman John Marshall, guitar sorcerer John Etheridge, and woodwind player extraordinaire Theo Travis, who, while the only Soft Machine Legacy member that is not a Soft Machine alumnus, clearly has fully internalized the SM ethos.
Posted by Arnaldo DeSouteiro at 6:40 AM