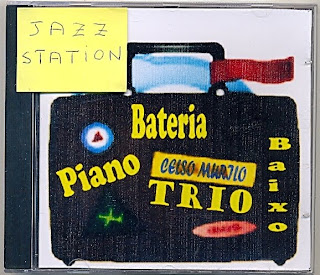 The opening track is one of the three most creative readings I've heard of Antonio Carlos Jobim/Newton Mendonça's "One Note Samba" ("Samba de Uma Nota Só") along with the performances by Michel Legrand (overdubbing several pianos on "Twenty Songs of the Century," propelled by an uncredited Airto Moreira on percussion) and Lindolpho Gaya, the great Maestro Gaya, who used to close his concerts with a stunning solo piano version of this tune. (I've recorded it, but the album remains unreleased.)
Other highlights: "Adeus América," "Stella by Starlight," "Watch What Happens," "Samba Novo," "Da Cor do Pecado" and amazing fantaisie-impromptus of "Carinhoso" and "Asa Branca."
Posted by Arnaldo DeSouteiro at 5:39 AM