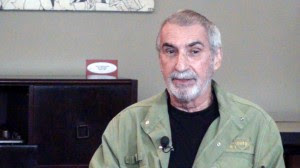 (born September 15, 1931, Rio de Janeiro, RJ, Brazil;
died November 16, 2010, Rio de Janeiro, RJ, Brazil)
Saroldi was an idol for me since the mid-70s, when I still was a teenager and listened to his radio programs at the JB-AM station in my native Brazil. Later on, we became friends and I had the honor to be interviewed in such radio shows as "Noturno," "Arte Final" and "As Dez Mais da Sua Vida" that sometimes he presented alongside another dear friend, Mauricio Figueiredo. I also took many artists to be interviewed by him at JB-AM, like Lindolpho Gaya, Stellinha Egg, Luiz Bonfá, Eumir Deodato, Tania Maria and Eliane Elias. After I moved to LA in the 2000s, we lost contact. But it's all past. Rest in Peace.
For a bio (in Portuguese), please check:
http://www.dicionariompb.com.br/luiz-carlos-saroldi
Posted by Arnaldo DeSouteiro at 5:55 AM