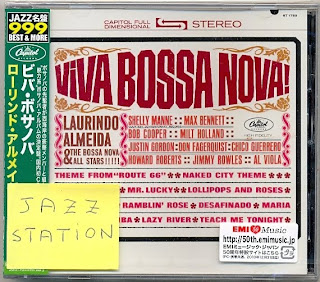 Brazilian guitar ace Laurindo Almeida leads a studio group called The Bossa Nova All Stars on this date produced by Dave Cavanaugh & Bill Miller, and recorded in Los Angeles, back in December 1962, for the Capitol label.
It's being reissued now in Asia, in a series that celebrates the 50th Anniversary of EMI Music Japan, Inc. The CD cover reproduces the original LP sleeve, with many pics of the musicians and the liner notes by Anthony Corbett.
The repertoire includes only two Brazilian songs, "One Note Samba" and "Desafinado," both co-written by Antonio Carlos Jobim & Newton Mendonça. All others are pop and jazz tunes (by people like Henry Mancini, Billy May and Nelson Riddle) done in latin-tinged arrangements.
Besides his magnificent work on acoustic guitar, Laurindo is heard playing cavaquinho (mispelled "cavaquinha" on the back cover, but presented as "a Brazilian instrument similar to a ukelele" on the credits) in some songs. Among them, Sidney Bechet's "Petite Fleur!"
Another surprise is the presence of jazz pianist Jimmy Rowles playing "electronic organ" exclusively, in a style very similar to Djalma Ferreira's approach to this instrument, with no influence of Jimmy Smith or any other Hammond jazz virtuoso.
The stellar cast also includes drummer Shelly Manne, Howard Roberts and Al Viola alternating on rhythm guitar, Bob Cooper on tenor sax, Justin Gordon showcasing a gorgeous sound on flute, plus Don Fagerquist (trumpet), Max Bennett (bass), and percussionists Milt Holland & Chico Guerrero, pictured playing cabasa and pandeiro, respectively. Nice and mellow.
Posted by Arnaldo DeSouteiro at 11:21 AM