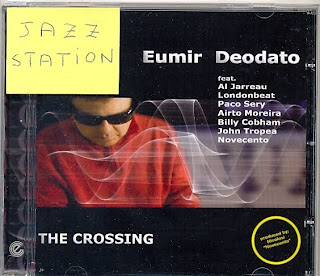 Eumir Deodato's first studio album as a leader in 21 years, "The Crossing" is coming out today in Europe, manufactured & marketed by the London-based label Expansion Records, under license from Soul Trade, and distributed in the UK by Essential Music. For now, there's no domestic release planned for the US market.
This new project, Deodato's first CD since "Somewhere Out There" for the Atlantic label in 1989, was produced by the Italian group Novecento, and recorded, mixed & mastered at their Nicolosi Studio in Milan.

Among the special guests are the brilliant singer Al Jarreau (who appears on the first video, "Double Face," an up-tempo urban/dance song for which the virtuoso vocalist wrote the lyrics), three former collaborators who recorded on Deodato's groundbreaking "Prelude" LP for CTI - Airto Moreira, John Tropea, Billy Cobham - and the Londonbeat group.

This new album from the Brazilian Jazz Funk maestro features Al Jarreau on two tracks – the flowing "Double Face", and the smooth jazzy-soul of "I Want You More," that also features Novecento and includes Deodato's best Fender Rhodes solo on the date. "The Crossing" is a funkier affair (with the horn section using an excerpt from Deodato's acid-jazz hit "Skyscrapers" as a riff), whilst "Night Passage" is a mellow instrumental. Novecento returns for the strong dancer "Rule My World".

All tracks were co-written & co-arranged by Deodato & the Nicolosi family specially for the project, except "Summerime," the famous Gershwin standard done in a nice CTI-like arrangement (scored by Deodato alone) with lush strings, and both Deodato and Tropea soloing in their unmistakable groovy styles. 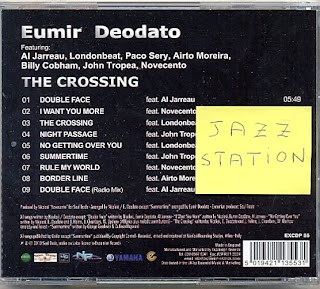 Posted by Arnaldo DeSouteiro at 4:34 AM